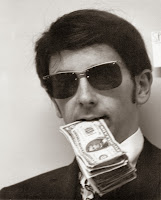 That's a really fair point about rap lyrics. That said, Pharrell Williams who is on that rapey song is one of the leading producers of today, and most of his stuff sounds like re-hashes of older songs, rather than boundary pushing.

The Robin Thicke song is a vapid, postmodern überriff for the GTA generation, and it's irritatingly catchy. As you say, where are the Brian Wilsons?

Pharrell is clearly talented, Tuesday Kid; but maybe we've got to the point where the only viable outlet for such talent is rearranging what went before.

Steerforth: a revived Radiophonic Workshop is just retro futurism gone crazy. We'll all be wearing Courreges go-go boots next and re-eneacting of favourite scenes from Barbarella.