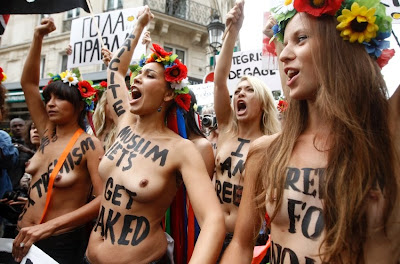 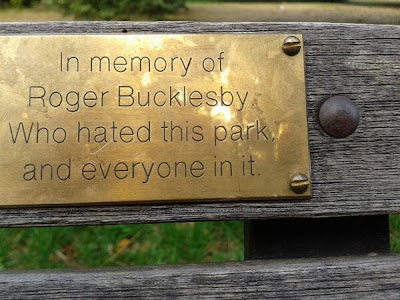 Although it soon became clear that Mr Bucklesby was a figment of a writer’s imagination. And yet that somehow makes the park bench thing even more endearing; whereas the fakery behind Femen disturbs us. I keep coming back to those words by TS Eliot: “human kind cannot bear very much reality.” And I think Eliot would have chuckled at Bucklesby but I’m not sure what he would have made of all those nipples.
Posted by Tim F at 1:58 pm

See this is where men and women differ - I would have chosen women with bigger boobs.
If they're going topless surely that's the whole point ?
Unless that's too maternal for the poor lamb and he would be too intimidated by them ?

Shame the park bench man isn't real, I think I'd have liked him.

Once again the cup of happiness is dashed from my lips as I am about to drink... Ah well, there's still that wonderful picture in your side-bar. Please tell that is real.

Quality not quantity, Swazi. I guess he rates pert over pendulous.

Everything on this blog is entirely real, Tim. Or so the voices tell me.

I imagined muslim women's idea of getting naked was to show their face. Rather shocked by these photos, not least after all the hoo-ha caused by a Brum university banning the full-face hijab. Which of course is being correctly regarded as a cultural choice on the students' part and not a religious compulsion.