A few days ago I was discussing with a friend why most attempts to depict Bangkok in fiction (novels, films, whatever) seem doomed to failure, whether they’re the work of locals or outsiders. Look at what Wong Kar-Wai did for Hong Kong; he’s created a city that is at the same time authentic to people who knew it and compelling to those who’ve never set foot there. Graham Greene wove together the realities of roads and buildings and dodgy policemen in Saigon or Havana or London with another, imaginary world that became known as Greeneland. But BK always seems to be a backdrop, whether it’s for high-octane shoot-outs (eg Bangkok Dangerous) or drunken mishaps (The Hangover II). I don’t recall ever watching a movie or reading a book that couldn’t plausibly have been set in any other city that’s hot and a bit sleazy.

So I came to Only God Forgives with some trepidation. There were some positive indicators; apparently Nicolas Winding Refn’s latest provoked a real Marmite response at Cannes, with half the audience walking out and the rest giving a standing ovation, which suggests that it at least makes an effort. And although the central character Julian is an American, he’s supposedly lived in the city for a decade, which should place him closer to a Greene anti-hero in terms of his perspective on the city; not a complete newbie like the Hangover II’s amiable idiots but still culturally an outsider. He runs a boxing gym as a front for his successful drug smuggling business; but when his brother is murdered and his appalling mother comes to town (a foul-mouthed Kristin Scott Thomas, channelling Cruella de Vil and Bet Lynch), things begin to go awry. 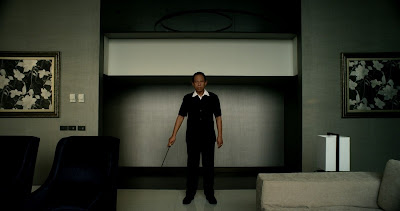 Unfortunately, Julian is played by Ryan Gosling, who spends most of his time staring into the middle distance with a blank look that could represent spiritual contemplation or extreme boredom or both. The real heart of the movie, and the best acting performance, comes in the form of Vitaya Pansringarm as Chang, a local policeman who bypasses due process by acting as a dispassionate angel of vengeance. The closest analogy with Hollywood is probably Dirty Harry, although really he’s a personification of karmic retribution, coolly deciding who will die and who is merely maimed, based on the gravity of their own misdeeds. While we’re on the subject, orthodox Buddhist doctrine has no need for a personalised God to dish out justice, so I’m not entirely clear where the title comes from.

That aside, does the film encapsulate Bangkok any better than previous efforts have managed? Well, let’s tick off the good points first; Refn doesn’t massage the linguistic reality to make things easier for Anglophone audiences. Most Thais, even in Bangkok, don’t speak much English, if any; the film reflects this, rather than – as most Hollywood takes on the city do – allowing every noodle vendor and transsexual hooker who interacts with a farang a workable grasp of cheerful pidgin, so we don’t need any of those dreaded subtitles. Refn doesn’t make concessions for the post-literate generation of moviegoers.

Moreover, in a very violent movie, it gets the violence right. The muay thai scenes look pretty authentic; and the sword that Chang wields is a proper Thai darb rather than a Japanese blade that would be more familiar to Westerners. These seem like minor points, but high-profile, big-budget movies such as The Man With The Golden Gun (much of which is set in Bangkok) have got these things wrong in the past, mashing multiple traditions together into a mess of pan-oriental bloodlust.

So this is the real Bangkok, right? Well, not really. For a start, the bulk of the action takes place indoors. I have no doubt these were all authentic Krung Thep locations but if there are no windows they may as well be sound stages. When we do venture outside, it’s usually in the dead of night and although the omnipresent chirrup of cicadas rings true, the cacophony of car horns and luk thung music is absent. OK, you can’t expect Refn to conjure up that signature scent of frying chillis and blocked drains but there’s little feeling of how busy the city is, and how many people are crammed into a relatively limited space. 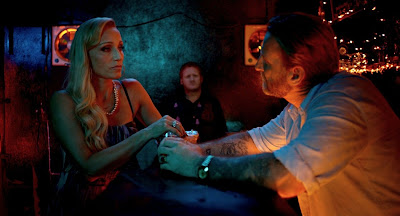 Instead, the world Refn creates is almost exclusively filmic, with multiple nods and winks to other directors. Many of the scenes in brothels and karaoke bars feel like love letters to David Lynch, all dreamy ambiguity in long shot; and the demise of Julian’s brother Billy echoes Alan Parker’s Angel Heart. The blood-spurting violence, some of it pretty anatomically explicit, nods to the inventive nastiness of much recent Korean cinema, with one victim left resembling a side of beef in a butcher’s cold store. Of course it’s possible to take these perceived connections too far; when Chang slices open a man’s eyeballs I’m immediately reminded of a similar scene in Buñuel’s Un Chien Andalou, but maybe Refn just likes the idea of sliced eyeballs. Chang is equally inventive with steel chopsticks and a pan of hot fat; only when he relies on his police-issue pistol do his deadly skills desert him. He’s pretty cool; but his even-handed righteousness, untainted by favouritism or graft, will provoke raised eyebrows among those who come into regular contact with Bangkok’s boys in brown.

So no, Only God Forgives doesn’t get Bangkok right. Instead, it creates a cinematic theme park that picks out a few elements, something akin to those Chinese simulacra of English village life. But back to that conversation I was having about Refn’s equally inept predecessors. It took place in a restaurant called Hemingway’s, a traditional Thai house fitted up to serve as a tribute to the archetype of gruffly ruminative machismo, drawing a gentle veil over the fact that Hemingway never actually visited the city. But the proprietors have created a reality in which he might have done, an alternative Bangkok to flatter the vanity of many a grizzled expat who can still see himself chasing bulls and climbing Kilimanjaro even if nobody else is in on the joke. It’s not the real Bangkok, and neither is Refn’s and neither is mine or yours. Maybe the real Bangkok doesn’t exist.
Posted by Tim F at 10:09 am

I loved reading this. My review of this movie was a tad less in depth (to say the least haha) but I have to agree with you on the David Lynch (Lynchian?) aspect. It's where my mind went too. I thought Gosling was good particularly considering the scarcity of dialogue and lack of emotion Refn affords this main character.

Gosling is still channelling his strong-silent-type role as the driver from Drive?
Good review, would like to see this now. I was never aware of it. First noticed it on a poster by the escalator when I was going up at the Emporium to see The Wolverine on Friday night btw!

Only the tiniest quibble about an otherwise excellently rendered commentary, one thing I find part of Bangkok's charm is the relative lack of blaring car horns, even in the most horrendous gridlock. The difference, when compared to somewhere like Saigon (or even Kanchanaburi) is startling.

I'm still not convinced by Gosling, M. There are "still" actors who are utterly compelling, from Keaton and Garbo onwards. But Gosling just looks slightly bored to be there, even when he has a script better than this one.

Fair point, Jack – although maybe more use of the horn would mean fewer accidents. I was really thinking of the non-specific background hubbub, which is missing when scenes appear to be shot at 3 in the morning.