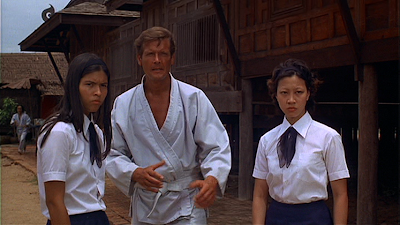 Out of Bangkok for the weekend, we flick on a movie channel and find, of all things, The Man With The Golden Gun. It’s a justly derided effort, the point where knob gags and silly sound effects finally got the upper hand; the egregious Sheriff JW Pepper returns, the Jar Jar Binks of the franchise; and although some previous Bond girls had been pretty inept standard bearers for feminism, surely Britt Ekland’s Mary Goodnight was the first to be a certifiable moron? The only reason we end up watching it is to catch my brother-in-law’s cameo as a voiceover artist. (He dubbed the cocky Bangkok urchin who helps Roger Moore fix the motor on his boat, and then gets pushed into the khlong for his troubles.)

The depiction of the Thai capital is culturally confused, to say the least, especially when it comes to the martial arts scenes. Although Bond attends a muay thai (Thai boxing) bout, he also finds himself tussling with sumo wrestlers (Japanese), then confronted with what appears to be a school of kung fu warriors (Chinese), a couple of whom dabble in krabi krabong (Thai swordplay); and he’s finally rescued by a pair of feisty sisters – one speaking Thai, the other Chinese – who show off their karate skills (Japan again). And when we finally get to Scaramanga’s lair in Khao Phing Kan (now more commonly known as James Bond Island, on Thailand’s Andaman coast), we’re told it’s in Chinese waters. We’re being presented with one big, homogeneous exotic Orient, like one of those pan-Asian restaurant buffets where you’re encouraged to pile inept renditions of satay and sushi and green curry and dim sum on the same plate.

The following day we stop off at a place called Palio. It’s essentially an open-air shopping village, supposedly designed to resemble an Italian town, although the attention to architectural detail and authenticity doesn’t appear to have extended to the stuff in the shops. There are several places selling sort-of antiques in a non-specific European style, with Capodimonte knock-offs and faded French tapestries jostling against Union Jack cushions and a few postcards of Audrey Hepburn; in one, we’re serenaded by a compilation of German love songs. Lots of Thai people like the notion of Europe, and the veneer of sophistication it brings with it; but actually engaging with the details at a level deeper than a fake Gucci bag seems to be too much effort. Maybe this is Asia taking its belated revenge on 007.

In between we pay an all-too brief visit to Khao Yai national park. It’s the rainy season, so the forest is at its peak of lushness; and the macaques are as endearingly obnoxious as ever. There are meant to be wild elephants but I’ve never seen one there and neither has anyone I’ve asked. Occasionally you see the evidence of their fleeting presence: piles of dung; crushed foliage; maybe a footprint. And I wonder if someone on the park staff has the best job in the world, going out just before dawn to create teasing, hopeful hints of something that doesn’t actually exist.
Posted by Tim F at 6:48 am

Fascinating. It is a truly dreadful film, but when I went to see it at the cinema as a boy, the return of Sheriff JW Pepper produced paroxysms of delight. I also loved the nieces.

Perhaps it works best as a children's film.

Something I often wonder about Italian restaurants in Thailand - do they have big pictures and statues of Jesus all over them, as Thai restaurants in Europe do with Buddha?

No Mike, it is all brooding Marlon Brando figures, photos of Vesuvius and Andrea Bocelli style singing waitors.

Well anything which makes a James Bond film even more hilarious (ie cultural knowledge) surely makes it worth the two hours of your life you'll never get back!

Hey Tim! Not the franchise's best outing, true enough. And it's always tedious to hear Christopher Lee talk about it. Tho "the 74, Sir?" gag always makes me chuckle. I must confess to ignorance of the cultural smorgasbord, but they screw up London scenes just as badly. Never spoil a good story with the truth tho, eh? Indigo

Dan is entirely correct, Mike. Although oddly, the Thai restaurants here manage without the mega-Buddhas.

True, Laura. They are a bit of a chore, aren't they. Although I still maintain some fondness for From Russia With Love.

That's why JW Pepper is almost refreshing, Indigo - it's good to see them getting America wrong as well. But I do agree re: Christopher Lee. Should have been a classic Bond villain (was Fleming's choice for Dr No) but he's rather colourless in this. Maybe he needed Wicker Man hair.