Bangkok: mythbusting on the MRT

There are plenty of myths about Thailand, believed and disseminated even by some people who have spent a long time here. One is that it is a hotbed of sexual libertinism. Well, sex goes on, and there’s a thriving and lucrative sex trade that can cater to pretty much any taste, some of them pretty nasty. But at the same time it’s a very conservative culture in many ways and to a westerner, the level of primness, naïvety and downright ignorance about sexual matters, even among otherwise sophisticated and educated people, can be pretty startling. 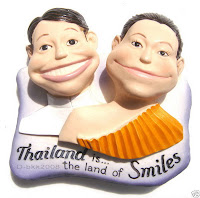 Another prevalent fallacy is the idea that all Thai people are sweet and kind and helpful and charming and smiley. Well, there are some utterly lovely Thai people, naturally; and at the same time there are some entirely despicable arseholes, amoral, arrogant, dishonest, hypocritical and vile; and a hell of a lot of humanity somewhere in between. Just as I’m sure is the case in Trinidad or Togo or Tuvalu or anywhere else in the world. Of course, if your sole contact with Thai people is limited to the various service staff in your resort hotel, you’re going to come away with the idea that all 60 million people in the country exist in a state of readiness to put aside whatever they’re doing to bring you a drink, and give a graceful wai and smile as they do it. And it makes perfect sense for the tourist trade to propagate that image as well.

If you really want to disabuse yourself of the notion that Thailand is a culture of altruistic angels, try using Bangkok’s ever-expanding-but-never-quite-enough public transport system at rush hour; specifically the MRT (the underground/subway), BTS (aka the SkyTrain) or the Airport Link, on which only about 10% of the passengers appear to have come from the airport, the rest being opportunistic commuters who happen to live and/or work somewhere in the vicinity of one of the idiosyncratically located stops.

I mean, it gets crowded. No news there, it’s part of modern urban life. But the real fun comes when you try to get off. Again, there are some helpful people who will move aside, even step off the train for a moment if it makes things easier. But very often there’s an obstinate clot of bodies, standing stock still in the middle of the doorway, exuding a heady cocktail of stupidity and selfishness as other passengers try to negotiate the gaps around them. I know this behaviour is not unique to Thailand and that passengers in London and New York, Paris and Hong Kong can be pretty arsey on occasion. But I don’t recall a time when exiting a packed carriage in Bangkok *hasn’t* involved negotiating these bovine obstructors. Rather than an occasional irritant, it’s a norm, a default position.

I’ve wondered about the reasons for this. Maybe it’s because Thai society is deeply hierarchical, with the nature of social interaction very much determined by relative ranks in age and status. The eco-system within a carriage is far more homogeneous; the very poor don’t go there (because they can’t afford it) and nor do the very rich (because they’d rather take twice as long in their chauffeur-driven Mercs). The very young and very old are also thin on the ground at peak times. So nobody knows where they exist in relation to anybody else, nobody knows whether they should wai first or wait for a wai, push through or step aside. Rather than being actively obstructive, these people are simply rendered immobile, frozen in a stasis of social embarrassment, desperately trying to avoid getting caught in an “after-you-no-after-you” loop for eternity.

Or maybe they’re just doing it to annoy me. 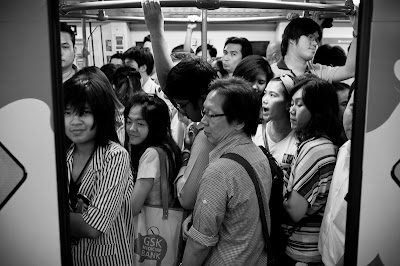 Hey Tim! Malign intent or hesitation on their part? Oh, a little of both, I imagine. I like tube trains about as much as I like buses; this sounds like Hell on Earth. Indigo

I adore tubes, Indigo. I love the disorientation that occurs when you arise in a totally different part of the city. That's why such asshattery annoys me so.

We all have a breaking point, e@l.

I just wanted to say I love the phrase 'clot of bodies'.

And to say I think Singapore is worse than Bangkok. Although I haven't been to Bangkok for ages so maybe things have changed.

Maybe use the boats instead, another month or so and they will be on Sukhumvit judging by the rain we are getting here and north of us.