OK, back to that PS at the end of the previous post. In the Word of Mouth discussion, one Movingtoyshop says:

I tend to take anything that’s littered with spelling and grammatical errors and written by someone who’s a stranger to paragraphs and punctuation with an extremely big pinch of salt.

And so, to be honest, do I. Are we wrong? Well yes, according to some of Sunny Hundal’s friends when he posted the following on Facebook: 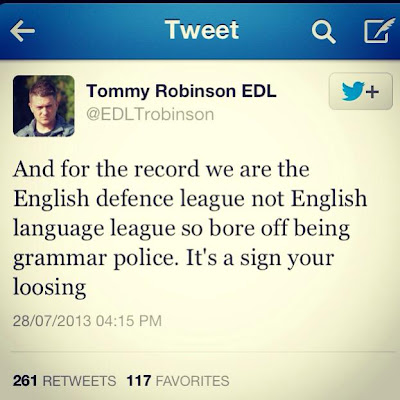 Some suggested that Robinson (leader of the populist, anti-Muslim protest movement the English Defence League) was in fact deliberately playing up his own linguistic ineptitude, in an effort to attract sneering putdowns from middle-class lefties and enhance his own credentials as a man of the people. Others felt that it was wrong of Hundal and crew to mock someone deficient in “cultural capital”. I’m torn. Yes, there’s a certain sneery superiority at work if we poke fun at Robinson’s spelling when we should be dealing with his arguments; but at the same time, shouldn’t those who seek to defend what they see as traditional English culture be treating the English language with more reverence? (And if you’re so proud of your handiness with an apostrophe, have a go at this.)

At least with grammar and spelling, there’s a degree of unanimity about what’s right and what’s wrong, even if the likes of Robinson (pretend to?) forget. When it comes to the content, the words themselves, we all seem to be running around like headless clichés. The magnificent Mary Beard seems to have come up with a pretty good rule of thumb; if it’s not something you’d want your mother to hear, don’t say it on Twitter. Liverpool FC, meanwhile, are rather more specific in their efforts to rid the beautiful game of ugly attitudes: 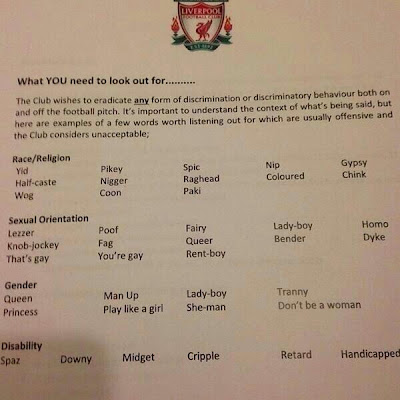 That said, such a list wouldn’t have helped Barbara Morgan, the communications director for Anthony Weiner’s increasingly preposterous bid to become mayor of New York. When asked to comment on an intern who had written about her time on Weiner’s team, Morgan refrained from using any of the proscribed words on the Anfield list but did manage to call her a “bitch”, a “slutbag”, a “twat” and a “cunt”. Does anyone have her mum’s number? Or my mum’s, for that matter, because she certainly won’t like that last bit.
Posted by Tim F at 11:58 am

Why did the apostrophe quiz have to be done under pressure? It made me feel shakey.
I enjoyed several pages of creative insults on Guardian CIF ( before they got repetitive & a bit barrel-scrapey ).
I'm all for being PC, actually, but isn't there a case for being really, really rude when using insults?

Well, yes. See the next post for one way to respond to them.