I like Twitter. I like it because it’s the perfect environment for smartarse one-liners; and smartarse one-liners make me laugh. I don’t buy the argument that it’s a symptom of shortened attention spans; as Pascal said, “I’m sorry to weary you with such a long letter, but I didn’t have time to write a short one.” And in any case, suggesting that a fondness for short, punchy things precludes an appreciation of more sustained efforts is like saying you can’t enjoy the Ramones and Shostakovich.

This is not to say that Twitter is perfect, of course. In recent weeks, some users of the service have said some downright vile things about certain high-profile women; wherever we might draw the line in limits on free speech, direct threats to kill or rape individuals fall on the wrong side of it. OK, Twitter has been lackadaisical in its attitude to such abuses and has now been shamed into some sort of action. But surely the main blame for such activities lies with the perpetrators rather than with any particular social media platform; we may as well demand the English language be called to account.

So I don’t agree with Caitlin Moran’s campaign to make today a day of #twittersilence, although I appreciate the anger that lies behind it. Apart from anything, what with The Archers omnibus, a crucial day in the Test Match and the revelation of the new Doctor, it’s a bloody silly time to do it. And I suppose there’s a sound argument that, as a man, I can’t properly appreciate the true impact of the misogynistic bile that the likes of Caroline Criado-Perez and Mary Beard have had to face. It’s all about the patriarchy, innit.

Well, fair enough. But if we’re talking about inequalities of power, it does seem a little rum that #twittersilence has come from individuals, such as Moran, who have plenty of other avenues through which they can communicate to the wider public. She uses Twitter, and uses it well, but she doesn’t need it, what with her Times column and best-selling book and TV and radio appearances and all that. The same goes for India Knight, who demonstrated just how little she needs it by closing her account yesterday. But not before leaving the following message (and thanks to Mic Wright for flagging this one up). 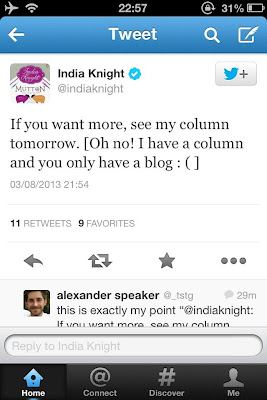 Well, yes. I suppose that means if I say something horrid about India Knight she wouldn’t even notice it, what with this being a mere, forelock-tugging blog and all. Which leads us to the fundamental question raised by Moran’s boycott; if someone takes to Twitter to say something revolting about Criado-Perez or Beard, Moran or Knight or any other man, woman or blogger and nobody notices because everyone else is boycotting Twitter, does that person automatically become the new Doctor?


Twitter is the Pub. It’s a private space where the landlord’s rules go. No principles are at stake, and your best hope of persuading the landlord to chuck out the obnoxious drunks is to persuade him that he’ll lose more customers if he doesn’t. Twittersilence is a consumer boycott in which, technically, we’re the drinks rather than the customers.

I'm in two minds about all is. I appreciate that the abuse aimed at Professor Beard is a disgrace and unprovoked, I can't help thinking that Ms Moran is being hypocritical. She certainly gives as good as she gets.

I'd have have hoped that by now we'd have grown out of sexism and racism. How very very sad.

Tried Twitter (twice) but just didn't get into the habit. I can see the appeal and, I'm with you Tim, it really lends itself to the one liner.

I've read on several Internet venues that Twitter is all atwitter regarding abuses and wants to make things right.
However, I want to comment on Doctor Who and his replacement [he'll be Number What? as Doctor Who?]
I'm a bit of a fan of Peter Capaldi, having first seen him in film In The Loop. Then there was an episode of Foyle's War, film Modigliani [as Jean Cocteau]...but it was In The Loop that he captured my attention. A friend [that I actually know] said to me, "...I'm sure he's a fine actor, but I'm a bit disappointed that he's another tall white guy as The Doctor." Oh well...Who then? Naveen Andrews? Or perhaps Idris Elba? I'd be satisfied with either, but my point is, I crush on Capaldi's talent and believe he'll make a brilliant Doctor Who. But what do I know...I also crush on Michael Kitchen .

I think my friend's opinion may have been lifted from a New York Times article:

"But it was a bit of a disappointment to those fans who hoped that, for the first time since the Doctor was introduced in 1963, the character might be played by someone other than a white man"

'I have a column in The Sunday Times, and a stepfather who was a senior member of Murdoch's management team'.

I would write a response to this blog post, but I've got bloody tweets to write.

Yes, Amro, Moran has definitely been criticised for some of her less PC tweets. I’m sure she's never stooped as low as death/rape threats but there are double standards her, sure.

I think a lot of it depends on the environment you create, Martin, the accounts you choose to follow. It's and odd feeling to look at someone else's feed: who are all these people? This isn't the Twitter I know.

And the assistants have been, for the most part, leggy 20-something women, Michele. I find the argument a bit pointless; but it's nice that people have the same passion over Who as they do over the faces on banknotes.

Indeed, Anon. You wonder why she doesn't just tweet "Fuck Off, You Horrid Poors".

And very bloody they are too, FR>

I was waiting for the populist media storm in reaction to 1 Direction fans threatening to murder and rape the remaining members of the Who after it broke that their latest record bore an uncanny resemblance aurally to Baba O'Reilly.

One imagines Pete Townshend would have been quaking in his boots at the thought of hundreds of prepubescent girls forcing themselves on him.