Philip French: when an old critic leaves the crease 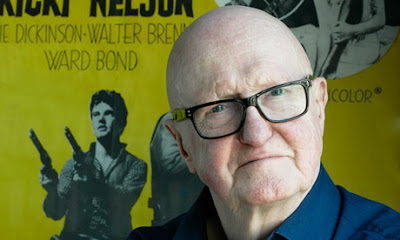 Philip French, who has been reviewing movies for The Observer for 50 years, is retiring. Back in the days when he’d only been doing it for 46 years, I quoted his distinction between critics and reviewers in an article for Drowned in Sound:

Reviewing is what writers for newspapers and weekly magazines do when they describe and pass judgement on new work for readers who haven’t read or seen it. Critics write about the established or emerging canon for readers presumed to be acquainted with the work under discussion and supposedly take a longer-term view.

Which is probably as it should be, but I can’t help but think the precarious state of any paid-for journalism means that successors to Mr French (Mark Kermode will be getting his desk) can’t be too particular; any eyebells, informed or otherwise, are good eyeballs. In a rather lovely valedictory interview, in which he is correct about Leonardo DiCaprio and popcorn, wrong about Ryan Gosling and very perceptive about how close Some Like It Hot is to not being a comedy, French says:

I don’t think that any critic in any medium will have the same influence that certain critics have had in the past. I am not anything like as influential as my longest-serving predecessors Caroline Lejeune or Dilys Powell but I think there will always be a place for good critics. I’m sure there will also be plenty of indifferent critics employed because they are personalities of kinds and write in an entertaining way but I don’t think that criticism will ever have influence in the same way again. Indeed, many newspapers in America now think they can get along perfectly well without them. But of course, most of them manage to get along without decent writing too.

A marvelous interview, though I can't disagree more about DiCaprio. From the first time I saw him in Romeo and Juliet, where he clearly didn't even understand half his own dialogue, to Titanic where he was so wooden he could have been his own lifeboat, I have yet to see him improve as an actor, particularly when directed by Scorsese.

Spot on about Some Like It Hot, though. And as for popcorn, well, that's just a matter of taste. Of crunchy, hot, salty, buttery taste. Mmmmm.