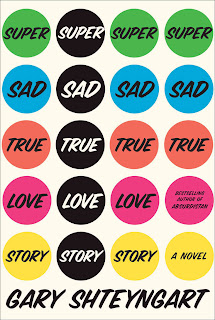 Two or three years too late, I’ve just finished Gary Shteyngart’s Super Sad True Love Story. It’s set in a dystopic near future with the US economy on the verge of meltdown and picks up on some of the same concerns – such as the interconnection of fear and technology – that I addressed in my book about the Noughties. It also depicts an era where post-literacy is the norm; but rather than facing the legal sanctions under which readers operated in Ray Bradbury’s Fahrenheit 451, they have to cope with the more insidious pressure of social disapproval. Bibliophiles receive the same sort of treatment we mete out to smokers, languishing under a combination of contempt, pity and incomprehension, forced to spray their books with air freshener to disguise their defiantly analogue smell; normal people are instead in thrall to devices called äppärats, a sort of high concept smartphone that also communicates a user’s age, credit rating and sexual attractiveness. When the hapless hero Lenny Abramov explains that his precious books are in a building that’s been condemned, a surly, disgusted security guard responds, “I think I just refluxed my lunch.” Of course I’m on Lenny’s side in this fight. Although I have to admit, I read the novel on a Kindle. Does that make me a bad person?

PS: “TIMATOV”, one of the creative äppärat-based acronyms with which Shyengart peppers his text, means “Think I’m about to openly vomit”.
Posted by Tim F at 7:15 am

The fact that you read it on a Kindle, two or three years too late, doesn't make you a bad person. Just another reader with a long list of titles, Tim. Thanks for flagging Shteyngart.

Tim, I'm reading your post on a Kindle. Does that make me a...