Canadian acrobats Cirque du Soleil have created a bit of a kerfuffle in Beijing by using an image of the Tiananmen Square massacre during a show. Any discussion of the events of June 1989 is proscribed in China, so some have interpreted the four-second projection as a shocking piece of agitprop. I’m not so sure. The picture of the man and the tanks has become a visual cliché in the West, almost divorced from the reality it portrays. Like the running girl or the burning monk or the falling soldier, it’s just part of our visual dictionary, used to represent bad stuff going on, even if we’re a bit vague about the context in which that stuff was happening. Lazy people use that horribly debased word “iconic” which really means that it’s a cliché but we can’t bring ourselves to say so. And as such, it’s ripe for modification and pastiche: 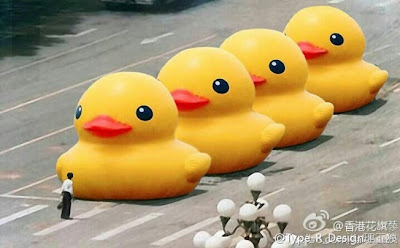 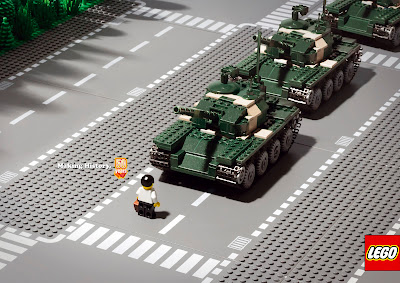 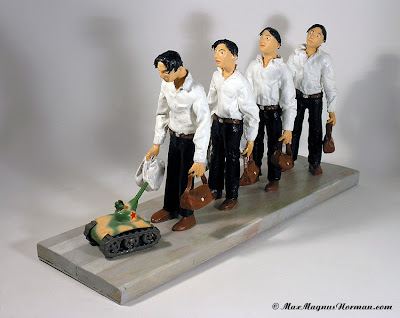 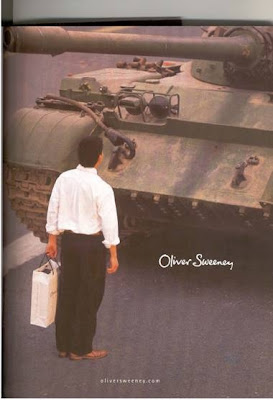 My guess is that whoever was responsible for including the shot knew it was a powerful image but didn’t really know why; it’s just become shorthand for repression and similar bad stuff. In fact, rather like all those Asian kids flaunting Nazi imagery for purportedly comic effect. I await the next visit to Montreal by the Chinese State Circus with some trepidation.
Posted by Tim F at 12:19 pm

I'm afraid I wouldn't survive very long in China (or Japan or Germany for that matter) at all. I can't stand the fact that you can't talk about past wrongs. I love the ducky photo and similar re-positioning of such politically/culturally loaded images.