Damien Hirst and Olga Dogaru: but is it art? 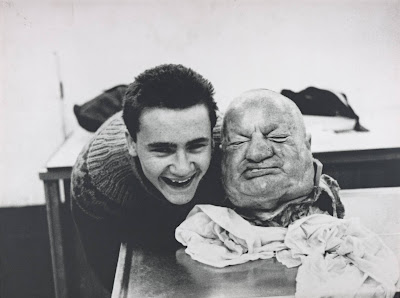 Damien Hirst is in trouble again, but not for a new piece of art. It’s an old piece of art; although I’m not clear whether the art is the head, or the two heads, or the photo of the two. OK, it’s some permutation of Damien himself with the head of a cadaver from a Leeds mortuary; and according to some concocted code of archaeological ethics, there have been calls for it to be removed from public view. This has led to the critic Jonathan Jones, whose exasperated contempt for Hirst’s recent stuff is well known, to defend the King of the YBAs. So in some shape or form this is art, maybe even good (qualitatively) art; but some people have decided that it’s bad (morally) art, so shouldn’t be seen out in public. OK, glad that one’s sorted.

And then we move on to the story of Olga Dogaru, who claims to have burned seven pictures that had been stolen from the Kunsthal museum in Rotterdam. Now, these certainly were art, because they were by the likes of Picasso and Monet, and were in the Kunsthal. But what happened to them after they were burned? Are the ashes art, whether because of some sort of aesthetic essence that pervades the charred scraps of painty canvas or because Dogaru’s act of burning itself can be perceived as some sort of Situationist prank, a sort of outsider take on what the Chapman brothers did to poor old Goya? Munch’s The Scream was badly damaged after it was stolen in 2004; how damaged does a work have to get before it ceases to be the work?

Or does their identity as art remain intact even after they’re gone, like the Colossus of Rhodes? Can we retrospectively apply conceptualist credentials to, say, Picasso’s Harlequin Head, because the idea behind it is stronger than the picture itself (the spirit was willing but the flesh was weak)? Or maybe the real art lies in the absence itself; in the gap where the pictures once existed. 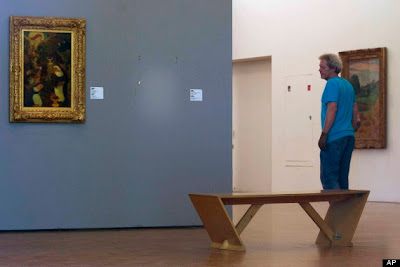 PPS: And the always interesting Tim Gashead directs me to more bits of dead folk at the Pitt Rivers Museum in Oxford.
Posted by Tim F at 7:35 am

not sure how I feel about the head art. If that was my father I'd be absolutely so angry - but if they consented then, morally speaking shouldn't that be fine?

It made me physically sick to read about those monet, matisse etc paintings being burned for ash art.

It is most disturbing that the dead person appears to be flinching in that picture.

'how damaged does a work have to get before it ceases to be the work?' I don't know, but there's an art world tradition of selling destroyed work. Printmakers cancel the plate by slashing through it when they print the last edition- (I bought a catalogue of Picasso etchings of animals on Amazon, without realising each picture would have a cross through it - people still buy the slashed plate for lots of money.) On Four Rooms a rejected canvas that Francis Bacon virtually destroyed went for £48,000. I guess if you're famous even your pencil sharpenings still have value.

PS It is not a link to Jonathan Jones but something else.

Yes, M, when it comes to what you can and can't do with human remains, I suspect there are rules that mean we don't need to argue over ethics.

I'd heard about the slashing of the plates, Annie; adds a certain something, no? And there's the Craigie Aitchison self-portrait. Thanks for alerting me to the dud link, too. Sorted now.

The head appears to be trying to get out of the picture, actually, while Damine -- well, I don't know about that expression...

I've decided I don't trust that guy. And I don't even know him.