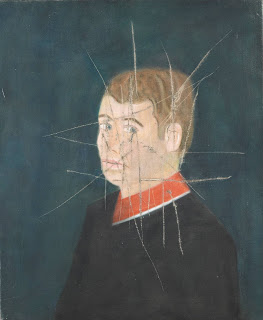 The National Portrait Gallery has purchased a self-portrait by the late Craigie Aitchison, complete with slashes that the artist inflicted on it after an acquaintance described it as “flattering”. This comes in the wake of a two-year sentence handed down to Wlodzimierz Umaniec, who defaced a Rothko at Tate Modern as a means of publicising his Yellowist ideology. Now, since the painting was Aitchison’s own work and property, no charges were levelled when he indulged in his own bout of practical self-criticism, but one does wonder whether his amendments have added to or detracted from the monetary value of the piece. Also, taking into account Duchamp’s desecration of the Mona Lisa and the Chapman brothers having their wicked way with Goya, it must be asked whether there’s some sort of hierarchy at work. If a more exalted artist than Mr Umaniec were to whip out the felt tips and improve an existing work, would there be a different reaction. An Aitchison slashed by Aitchison costs £36,512; how much for an Aitchison slashed by Rothko?
Posted by Tim F at 8:08 am

It's not a very interesting portrait, slashed or otherwise, but I suppose that marks me out as some kind of dinosaur.

An artist can surely do what they like to their own work. It sounds like Aitchison may have been trying to improve it. I like the scratches. The Chapman brothers Goya saga is just what we have to accept as inevitable if we entrust precious works to people based on how much money they're prepared to exchange for it, rather than keep them in the hands of more trustworthy people like museums. Although botched restorations show even they can't always be trusted. Duchamp didn't desecrate the actual Mona Lisa. Umaniec vandalised someone elses work. I don't defend the Chapman brothers, but if they bought them, legally I guess its different. I just hope next time they go to buy a masters work, the seller is more responsible than to let them buy it. But whatever, these cases aren't the same as Umaniec's.