I’m going to Vietnam in a few days’ time, so I had to get a visa, so I had to get some photos done. Thailand doesn’t have photo booths; instead, you go into a camera or print shop where someone takes your photo to the precise specification of the task to which it will be put, because the pics for passports and ID cards and work permits and visas to various countries all need to be different sizes and shapes. 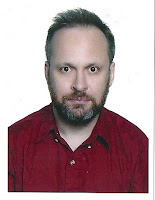 Except that when I went to pick up the prints, they’d clearly gone PhotoShop crazy on my picture, zapping the pimples and eye bags, doing a digital botox job on my forehead and I think they even toned down the grey in my beard. What’s left is a cleaned-up, hyperreal simulacrum of the hideous mess I see in the mirror every morning, which would be understandable if I were starring in an advertising campaign for some overpriced moisturiser, but this is meant to be for an official document that lets me get into a country. The photograph is the proof that I’m the person to whom the details on the document apply. If the photograph doesn’t look like me, doesn’t that make the whole thing a bit pointless? It may as well be a picture of George Clooney or Winnie Mandela or a patch of moss.

One could delve into the realms of social anthropology and deduce that the buffing and sheening done to my sort-of-likeness is part of the Asian desire for harmony in all aspects of life. Thai people tend to tell you what you want to hear, but to them this isn’t a lie; they genuinely believe that keeping you happy is more important than keeping you in touch with reality. (If you want to see how disturbed they get when reality intrudes, read the comments on this article.) Maybe I was meant to think I really do look like that. In fact, the picture won’t even make me look better, because it will only ever be used in conjunction with my real face, and its weird, glossy smoothness will just throw my own saggy, pockmarked decrepitude into brutal relief.

The funny thing is, I bet the Vietnamese immigration guys won’t give a damn that the picture looks nothing like me; but if it turns out to be the wrong size, I’ve got no chance.
Posted by Tim F at 7:47 am

I should have sent you a picture of me, taken 25 years ago. That would have saved you all the trouble.

use that photo of Andy Partidge - it still looks more like you :o)

I thought you were supposed to look shit on your passport because by the time you've had abig fight at check in, been strip-searched and endured a three hour delay, then suffered another three hours of a small child kicking your seat and interminable marketing ploys by flight staff waking you up every five minutes, that's how bad you'll look!

They'd turn me back because it hadn't been retouched, Martin.

That's why I did the beard, Swazi, to break away from the comparisons. Even the mighty AP can't grow facial hair retrospectively. (Although Retrospective Facial Hair does sound like an XTC album title.)

Well I still look shit, BB - but a sort of tidied-up shit.

Thank you, Rog. That's the nicest thing anyone's said to me since... actually, no, it isn't, is it?

Now you mention it - that photo does make you look almost exactly like George Clooney.
Or is it Rosemary Clooney? I'm always getting them confused.

I wouldn't have minded the chance to Photoshop my passport picture a bit, although I do look well sexy as it stands.