Only puppets, you know... for children... 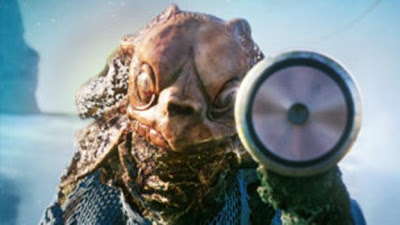 It’s all Nick Hornby’s fault, I suppose. Fever Pitch kicked off that whole genre of Blokes Remembering Stuff That Was Important To Them When They Were Younger, Preferably in The Seventies, which at its best could offer a potent blend of pop psychology and social history; at its, well, not-best, it involved the likes of Jamie Theakston sitting in front of a camera mumbling “Buck Rogers... space dust... Torvill and Dean... clackers... ” until someone turned off the lights.

The problem with these memoirs is that the reader responds to them not because of their intrinsic merits, but on the basis of empathy with the experiences described. So if you like football, you’ll like Fever Pitch; if you like Arsenal you’ll really like Fever Pitch; and if you’re also a bald 50-something novelist who likes Springsteen  and Anne Tyler as well as Arsenal, well why don’t you and Hornby just book a hotel room together?

I didn’t mind football when I was a kid, but I preferred Doctor Who. So I guess I’m a closer fit with Nick Griffiths, the author of Dalek I Loved You, which is basically Fever Pitch with Liam Brady replaced by Jon Pertwee. Ah, but then one starts getting picky. Griffiths is three years older than me, and his first DW memory is Spearhead from Space, also the first Pertwee story. I’m not quite sure what mine is – I do have distinct memories of The Sea Devils, but I would only have been three years old when that was first broadcast. Maybe I only remember the net-clad reptiles because one of their number appeared on the back cover of the 10th anniversary special; Griffiths still has his copy, carefully wrapped in plastic, but I’ve no idea what became of mine.* So my first story was probably The Three Doctors (and I do definitely remember that show, not just the Radio Times cover).

Anyway, it’s a gently amusing memoir as far as the Doctor-related stuff goes, taking you from collecting the Weetabix cards to actually meeting Elisabeth Sladen, but for some reason Griffiths insists on running through the various other things he got up to while he was growing up (his model seems to be Andrew Collins rather than Hornby) and this plays havoc with his structure as we leap from Who-related stuff to his other crazes, such as Action Man. Moreover, his grasp of fact and detail is less strong on the non-Who bits: he thinks the TV show On The Move was aimed at deaf people (it was made to tackle adult illiteracy) and Fanny Cradock’s name is misspelled. C’mon, if you’re going to be a geek, get it right.

But all this can be forgiven because at one point Griffiths lets slip his childhood address and it turns out that he lived not just in the same village, but on the same road as me. OK, he’d moved out about a decade before I arrived, and by that time Peter Davison had taken over and DW had become rather less essential. But for a moment, that weird bond of shared geography (yes, Nick, I know the Co-op of which you speak) dragged me in just a little closer to his world. And then of course, I realised I’d fallen into the tiresome trap set by the whole genre: these books are more about the reader than they are about the writer.

*The cover of the 10 anniversary special is also the only instance of Pertwee encountering a Cyberman during his stint as the Doctor, unless one counts his return in The Five Doctors (1983). But you knew that, of course.
Posted by Tim F at 7:21 am

That's not a coincidence, that's synchronicity.

"Coincidences are what are left over when you apply a bad theory" - P. W. Bridgeman

Ah yes, On the Move. My first memory of Bob Hoskins...

I haven't read it, but I remember what a relief it was, after the Calvinist 80s, to come out and confess how much I loved the 1970s. The early 90s retrospectives were very appealing (even with Jamie T), but as we ploughed deeper into the postmodernist era and DVDs appeared with übergeek special featues, with their uncritical, rose-tinted nostalgia, it all became a little distasteful.

I now feel obliged to reclaim the crapness of the 70s - the awful food, constant strikes, clashing colours, badly-made British cars and general sense of decline.

But I'm still glad that I grew up during that decade.

It's neither, Charles. It's just an ooh-that's-interesting.

Norman Rossington was in it as well, Martin. The only man to appear in a Beatles movie and an Elvis movie.

Steerforth: I've read separate research (which may have been no more thorough than the research underpinning those "I LOVE..." shows) that announced the best summer ever was 1976, and that most people are happiest when they are eight years old. I was eight in 1976 and my clearest memory is getting locked in a toilet in France.

You lived on Murray Road? I had someone else get in touch, from a few doors down. At this rate, by 2026 I might have collected the entire street. Ah, collecting.

Thanks for the review.