Th Frnch writr Gorgs Prc did 30 yars ago today. H wrot a whol book without using th lttr “”. I hav not rad it, not vn th translation by Gilbrt Adair, who did last yar. But I lik his bard. 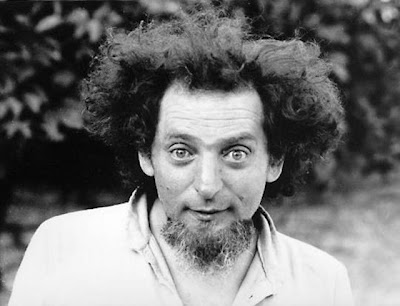 And talking of George, but a different one, and missing an “s” this time, and a different Gilbert as well, here is Gilbert Proesch, from an interview with the still-glorious duo in The Guardian:

Every English artist who has a show in Tate Britain is finished two weeks later. It’s the kiss of death. If you have Tate Modern, then the other one must be Tate Old-Fashioned.

Following such impeccable logic, perhaps the imperilled Battersea Power Station should be saved for the nation and reinvented as Tate Postmodern. Or, just for today, Tat Postmodrn.

I saw Gilbert and George in Dalston once, when I lived there many years ago. It was about 10am on a Sunday morning, the high street was relatively empty, and the pair of them were stood almost perfectly still, looking appraisingly at a bin.

You have to admire that kind of commitment to art.

The danger with over-bending it, is that the material is apt to wear thin, extremely quickly. Love the hair and beard. Sadly, I could only manage the latter, these days.

I rather like that Bend It video. Not seen it before. And Perec, well I did try and write a 2 paragraph blog post without using an "e". It was extremely difficult.

LC: I think the fact that they clearly *mean* it raises them in the estimation of many who think that "modern art" (anything from Picasso to Emin, via the pile of bricks) is pretentious shite. They're loveable eccentric uncles, who just happen to make stained glass windows of their own bumholes.

I have the same hair problem, Martin. Last week, I ran into someone I hadn't seen for a few years. He told me the hair had slipped to the bottom of my head, which is one way to describe it.