Whatever happened to Matt Belgrano?

Chris Bowers at OpenLeft describes how “the progressive political blogosphere” has been swallowed up by the professionals:

Only five years ago, the progressive political blogosphere was still predominately a gathering place for amateur (that is, unpaid or barely paid) journalists and activists unattached to existing media companies and advocacy organizations. Those days are almost completely over... It was, really, inevitable. Avant-garde, “outsider” developments which prove to have real support are invariably co-opted by any successful, institutional establishment. At the same time, these avant-garde movements are often willing to be co-opted, since established institutions usually have vastly greater resources than the independent, shoestring distribution networks of the avant-garde... RIP to the amateur progressive blogosphere. It provided a regular feeling of revolutionary ecstasy while it lasted, but there was no way it could last very long. It was a transitional period into a new media and political paradigm, not a new paradigm unto itself.

Bowers is talking about the US, and specifically political bloggers in the US, and more specifically still, left-wing political bloggers in the US. But I think he’s articulated quite nicely what’s happened to blogging as a whole since I started (nearly half a decade ago). Like punk rock, blogging managed to change the old order, but effectively burned itself out in the process, with old media’s embrace of the idea being something akin to John Lydon selling butter. OK, some of us old farts are still keeping the faith (Look! Patroclus is back!) but for the most part we’re just hanging around the King’s Road, charging American tourists to take photos of our preposterous haircuts. 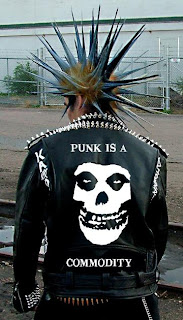 PS: Vaguely relevant ponderings from the defiantly un-progressive Iain Dale.
Posted by Tim F at 10:06 am

Though love's become/
A dying ember/
It will burn brighter than you ever dreamed.

(not that you're anything but gloriously ablaze yourself)

I wouldn't be that pessimistic about it, at least not yet. Blogging is still being used by amateurs to hold governments, media corporations, big companies etc. to account and is still doing a pretty good job of it. It's just that we've all got used to bloggers being there, so it feels less revolutionary, plus some of the energy and attention has shifted to Twitter and *shudder* Facebook.

I reckon amateur blogging still fulfils a very important political/social function though. (Not on my blog, necessarily, unless you call the occasional semantic deconstruction of brand names an important socio-political activity.)

My American tourists are Canadian.

I dip my toe into the odd political blog but it's the social stuff I enjoy.

Punk did make Fleetwood Mac a bit new wave for a time, admittedly.

With my gorgeous cheekbones and soft but spiky blonde hair I'm going down the Billy Idol route and am going to conquer the US. Forget the credibility accorded to the bogging amateur - it's a nice day for a white wedding.

BWT: Pah! A limp rerun of his fellow Canuck's line about it being better to burn out than fade away.

Oh I know it's still going, Patroclus. But it's as if some of the blogpunks have gone on to form PiL and Magazine, while the rest of us are still playing bass for Peter and the Test Tube Babies.

Fleetwood Mac stopped being useful when the mad one left, Geoff. Same with Pink Floyd.

I always saw you more as Palm Olive, Betty, off of them Slits.

Twitter has sucked the pithy blog posts out of me, but I still need somewhere to do longer ones. Therefore I am the damned, and blogging is "curtain call"

'I always saw you more as
Palm Olive, Betty, off of them
Slits.'

But where is Matt Belgrano??