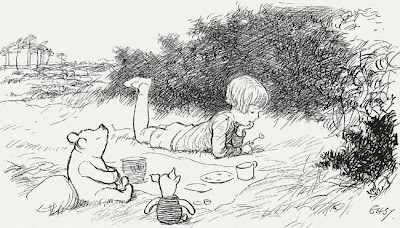 A lasting memory from my days at university – one of the few actually connected with my studies – was a tutorial about William Blake which gradually turned into a discussion of the last chapter of The House at Pooh Corner. Our tutor, a man who died far too soon, elucidated Blake’s notions of Innocence and Experience in terms of Christopher Robin’s attempt to explain his own Going Away to his friend Pooh:

Which had quite a resonance for a bunch of fresh-faced 18-year-olds, many grappling for the first time with overdrafts and washing machines, but not quite yet in the real world. At least we were still allowed to do nothing. We were studying English after all.

Many miles and years from the 100 Aker Wood, I happen upon a piece about the bloody iPad. The schtick is that the author, Peter Bregman, wants to give his back because “any free moment becomes a potential iPad moment.” And that’s the problem:

But something – more than just sleep, though that’s critical too – is lost in the busyness. Something too valuable to lose.Boredom.Being bored is a precious thing, a state of mind we should pursue. Once boredom sets in, our minds begin to wander, looking for something exciting, something interesting to land on. And that’s where creativity arises.

The funny thing is, Bregman isn’t some eternal student, a balding soixante-huitard who still deploys Christopher Robin and Blake and Alice and Syd Barrett and The Wind In The Willows and The Magic Roundabout in an effort to destabilise the military-industrial complex and justify the fact that he never irons his trousers. He’s writing for the Harvard Business Review, for crying out loud. This is work he’s talking about. So the next time your boss catches you staring into the middle distance when you’re meant to be doing something even less interesting, just tell her that you’re brainstorming with yourself, and she can run that one up the flagpole and see who plays Poohsticks with it.
Posted by Tim F at 8:03 am

seems a bit unreasonable to blame that on the iPad. didn't that happen the moment the web was invented? Or at least it did for me.

David Hepworth reflected on the same story last week: http://bit.ly/bim0JA I agree with all that's said about the importance of 'boredom' but agree also that it's a bit unfair to blame that on the iPad. Or even the Interwebs for that matter... Isn't the blame one we all shoulder collectively, in continuing to generate cultures where incessant, highly visible 'doing' appears to be valued above all else? The iPad is great, and i already love mine, but i don't treat it as an object with which i will fill all potentially 'empty' moments. Perhaps the notion of being bored is now one that we need to consciously embrace and, ironically, make time for?

True, the iPad is a manifestation/symptom of something else, not a cause. When I first came to Asia, I was surprised how many people on public transport, especially older people, seemed content to sit without any form of distraction (book, magazine, iPod, game, etc). Buddhist notion of removing oneself from the encumbrance of worldly things, both positive and negative? Also thinking of punk - channeling boredom/nihilism to positive effect.

Drat you. You've conjured up melancholy as I dream of (remember?) sunny days lying on my back watching clouds pass over Ireland. There may have been cider involved.

This is something I've been banging on about for years - ask my ex. Kids really have forgotten how to be bored and this probably dates from around 1979 and the advent of the Space Invader machine and the 5 minute quick fix. Before that, out of necessity and to dredge up the old cliché, we'd have to make our own entertainment, it just didn't exist otherwise. Unfortunately the cannier ones went on to become software/games/gadget designers creating more quick fixes and spoon-feeding successive generations their entertainment. I missed that generation by a couple of years so still value that staring into space time. It is also why I hate X-Factor and the like but venerate talent that "worked the clubs". Degrees for everyone is another symptom. The unnecessary studying of stuff the rest of us learned as we went along. Maybe I'm wrong and it's just progress but the number of thick as shit graduates I come across now compared to 20 years ago is incredible.

That could have been "throw that over the bridge and see who comes out the other side first".

BWT: I thought all the clouds over Ireland stopped for a while.

No, a good rant, Richard. But I think the thick graduates also owe something to the moment at which some bright spark decided that the ultimate point of education was to pass exams.