I've spent so much time and energy over the last year or so sneering at Andrew Keen and his anti-Web 2.0 spiel The Cult of the Amateur that it seems a bit superfluous actually to read the bloody thing, which I did last week. It would be charitable, if a little embarrassing, to report that I'd got the poor man completely wrong, and that his apocalyptic vision of the damage that blogs, social networks and Wikipedia are inflicting upon contemporary culture is bang on the money.

Well, it's not, but hundreds of others have already taken him to task over that, and I'm not going to chuck another bundle of twigs on the pyre just to make a point. That said, here's a very quick flavour of his argument: he expresses horror about a New York Times report that "50 percent of all bloggers blog for the sole purpose of reporting and sharing experiences about their personal lives." 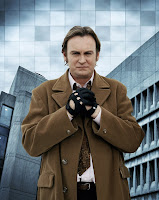 Well, as that consummate professional, the blessed Gene Hunt would put it, "You make that sound like a bad thing." Keen joins all the other defiantly analogue numpties (Janet Street-Porter, Mary Dejevsky, etc) in making the reductive and simplistic assumption that because bloggers don't necessarily write brilliantly incisive news stories, they're bad at what they do; which is about as sensible as asserting that because Cristiano Ronaldo doesn't get many wickets, he's a rubbish cyclist. I thought we dealt with all this well over two years ago? Ah. I see we did.

So Keen's grasp of blogging and other manifestations of Web 2.0 is on a par with all those broadsheet journos who suddenly tried to get their heads round Twitter when Stephen Fry got on board. Little or no surprise there. But what astonished me about his book is the number of other things that he appears not to understand.

Let's take economics. Now, I can't claim to be the heir to Keynes or Friedman, or even Robert Peston, but I think even I can see the flaw in Keen's objections to advertisers running user-generated clips at the 2007 SuperBowl:

According to the American Association of Advertising Agencies, the average professionally produced thirty-second spot costs $381,000. Yet Frito-Lay paid a mere $10,000 to each of the five finalists on the table. That's $331,000 that wasn't paid to professional filmmakers, scriptwriters, actors and marketing companies — $331,000 sucked out of the economy.

"Sucked out of the economy"? Since when has a cost saving been money sucked out of the economy? It's not as if Mr Frito and Mr Lay went off to some remote Scottish island, KLF-style, and burned that $331,000. So it didn't go to filmmakers or scriptwriters: but Frito-Lay doesn't exist to keep filmmakers and scriptwriters in business. They could have spent it on salaries or shareholder dividends, they could have knocked a couple of cents off some of their products, or redecorated their offices or given it to charity; all of which would have seen that money re-enter the economy.

Later, Keen demonstrates further that sums aren't his strong point when he multiplies 99 cents (the cost of an iTunes download) by 20 billion (allegedly the number of songs 'stolen' by downloaders in a year) and makes $19.99 billion. Maybe he can use that stray 190 million to pay off all those scriptwriters who are going to have to sell their grannies because the likes of Frito-Lay have sucked all the money out of the economy, like big, cheese-flavoured Hoovers.

But this is just a sideshow to Keen's most egregious flaw. It's not just that he doesn't understand Web 2.0, the thing he's attacking; he doesn't even seem to understand old media, the thing he purports to want to save. The history of print and broadcast journalism is strewn with examples of corruption, hyperbole, political spin and honest-to-goodness mistakes. Yet Keen lays into the online video Loose Change (which claimed that the 9/11 were carried out by the US government) and the Moonie-owned webzine Insight — originally a hard-copy magazine — with its smears against Hillary Clinton, as if wacky conspiracy theories and politically-motivated muckraking were invented at about the same time as wireless internet.

Moreover, he seems to believe that one of the main things that distinguishes traditional media from self-defined citizen journalists is paper qualifications. "After all," he sneers, attacking the credentials of bloggers such as Markos Moulitsas Zuniga and Glenn Reynolds, "who needs a degree in journalism to post a hyperlink on a Web site?"

Well, I've written for major (non-Moonie-owned) print publications in Britain and Asia, which I suppose makes me a journalist of sorts. And I've never set foot in a journalism class. The closest I've come to proper training was in 1993, when I sat in a pokey little office near Carnaby Street while a former disciple of Bhagwan Shree Rajneesh showed me how to sub-edit. "Above all, make sure it fits on the page," he said, and I think he was probably right.

In Keenland, it's not just journalists who need degrees and diplomas, though. He attacks Wikipedia by comparing it unfavourably with the Oxford English Dictionary, a product that apparently exemplifies the benefits of a properly trained and accredited editorial team. He neglects to mention, however, that two of the men most responsible for the success of the original OED, James Murray and Henry Bradley, were, by his own definition, mere amateurs, not even having attended university (a distinction they share with George Bernard Shaw, lauded by Keen as an example of the 'qualified' contributors that Britannica has and Wikipedia lacks). Incidentally, I got the information about Murray and Bradley, not from Wikipedia, but from a rather good book called The Meaning of Everything, written by Simon Winchester, who has worked with great success as a foreign correspondent for The Guardian and The Sunday Times. He read geology at Oxford, and I rather suspect he doesn't hold many journalism qualifications.

It would appear that Keen's (wilful?) lack of understanding even extends to the title of his own book. If we take the risk of conflating blogging and journalism under a general heading of people-who-write-for-public-consumption, what defines amateurs isn't lack of ability; it's nothing more than the fact that they don't get paid for doing what they do. Which may imply a lack of seriousness, but also frees them from a hell of a lot of other pressures, such as the demands of proprietors or advertisers. When he has a go at the "amateur", what he's really getting at, in his dim and disgruntled manner, is the "amateurish", a label that can be applied to a depressingly large chunk of professionally written product. Including, as I now know, Keen's own silly, ill-considered book.

PS: On the subject of Wikipedia's perceived shortcomings, Shane Richmond discusses the mysterious case of the phantom entry.
Posted by Tim F at 1:41 pm

I always found the fact that Keen has three blogs of his own to be very suspicious. Presumably he's allowed to have blogs, though, because he's a professional writer.

I haven't read his book, but I've always imagined that he wrote it to have a go at techno-utopians like Clay Shirky, rather than the hordes of 'amateur' bloggers themselves. Conservatives don't seem to like techno-utopians very much, what with their dangerous Marxist views of technology-enabled equality and everything.

I think you made a few new points there Tim....you tell 'im!

The Protocols of the Elders of Zion started on a blog, y'know.

...sorry. On second thoughts, can I renege that and choose a different conspiracy to have been invented by a wicked blogger? Except I can't think of one. But maybe The P of the E of Z isn't a good book to joke about.

Blogging is a slightly dysfunctional and really rather silly activity, but it beats necrophilia or heroin use.

I stopped getting the NME long before I started reading stuff on the internet. It had just become boring, like most weeklies and monthlies.

How can you compare an encyclopedia with a dictionary? I just found out how many members of The Band were Canadian on Wikipedia. I don't think the OED can tell me that.

Lovely post, Tim. As you kinda point out - more self-promotional boo-hoo. Non-specific moan-targets designed to generate self-heat - the inverse of Jeremy Clarkson's assault on Brown. There, it's more like: got a book/career to promote? - why not pick on a specific someone (bigger/an easy target) who represents the antithesis of what yr chosen demographic stands for, etc.

This is more about All Is Wrong - hey, fellow moaners can ya not feel The Wrongness of Everything? To me, it just represents a fear of Change on his behalf...and a vague appeal to others that feel the shifting of the ground beneath them and it, er, scares them. He's just scrabbling around for a readership from disaffected non-movers w/out any *real* explanation about what is wrong about moving...

Jeez: bad grammar/syntax on my part there///lol...I must be a blogger.

Personally I'm up for seizing the means of production from Andrew Keen, comrades.

Stephen Fry's twitter on being stuck in a lift "arse, poo and widdle" is my new favourite swear.

I saw Keen's book in Kinokuniya yesterday and thought, "There's another one I don't have to read because Cultural Dandruff has already done so, and torn it to shreds..." But you hadn't! Thanks for shattering that faith I had in bloggers always doing the hard yards... (cough). Luckily I find that, like most bloggers, you were correct in your assumptions so I was justified in not buying it after all.

That's so funny (not) about most blogs being personal being a "bad thing" - a classic strawman argument. He sets up his personal definition and then blags reality because it doesn't fit. Wanker.

Where is he? I want to stand on his toes and kick him in the shins at the same time.

p.s. I meant to say, "Caught In The Web Of Words" is a great book on Murray and the OED.

Simon Winchester seems to be an expert on everything. Does he blog?

(That was a joke, folks, not a serious query.)

Shirky escapes unscathed, Patroclus. It’s Jimmy Wales who really gets it in the neck, along with Chris Anderson and Tim O’Reilly.

Pleite, if we don’t joke about it, people take it seriously, and we know where that leads. As far as I can tell, belief in the Protocols is a good rule of thumb for distinguishing eccentrics from lunatics.

I think everyone’s stopped reading the NME, Geoff. People buy it on a sort of instinctive basis.

That’s a great idea, Kek-W. I'm going to write a book called Everything On The Interweb Is Horrid And I’m Going To Hold My Breath Until It Stops.

Since Keen seems to produce from his arse, Billy, that might be a messy promise.

Winchester is a clever fellow, Expat, but he’s got this habit of deploying very long sentences that get lost about two-thirds of the way through, which is distracting and no, I don’t think he’s got a blog; btw, I mentioned Iggy’s in passing in an article I’ve written for Thailand Tatler.

Good work Tim - I'm glad you're on OUR side!