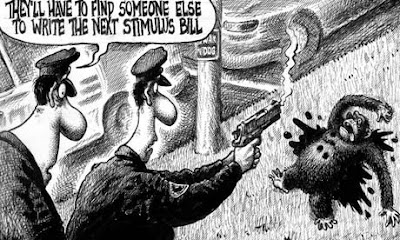 I don’t know whether the above cartoon, published in the New York Post earlier this week to much brouhaha, was intended to be racist. As Gawker has pointed out, the artist, Sean Delonas, doesn’t appear to be a particularly sophisticated political thinker, but his peculiar obsession would seem to be homosexuality rather than race.

As with the Danish cartoons controversy (see here and here for previous rumblings), I think the aspect that everyone’s overlooked is that Delonas’s cartoon is completely crap, a far greater crime on my charge sheet than any perceived sociopolitical insensitivity.

He does, however, follow in a glorious tradition of bad, reactionary cartoonists. I have particularly fond childhood memories of leafing through my grandparents’ copies of the Daily Express and enjoying the foam-flecked daubs of the veteran Cummings. Here are a couple of his gems, that make Delonas look like a woolly liberal: 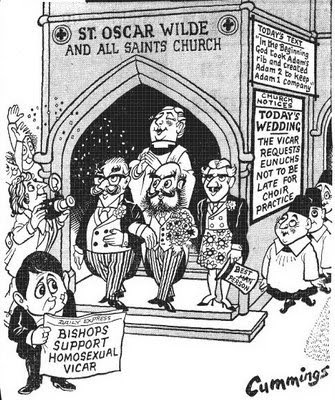 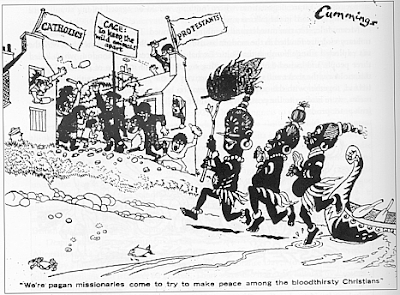 *Although, as the deliciously preposterous Al Sharpton failed to acknowledge, chimpanzees aren’t monkeys.

PS: And, if you really want to see people living up to derogatory ethnic stereotypes, here’s an Irish joke to beat them all.
Posted by Tim F at 6:20 am

Any cartoonist who has to have someone in the cartoon reading a newspaper containing the story they are referencing is by definition awful.

And Clement Freud at that.

You'd think it would be the NYPD complaining. I mean, if we actually do assume that Delonas is intending his audience to equate the chimp with Obama, then doesn't his overall point have to be taken as, cops are racist, since it's the cop making the comment?

On the other hand, he doesn't exactly have a great track record himself, bigotry-wise, so who knows. Even if he simply meant that a monkey could have done a better job of writing the Stimulus Bill, we're back to the whole chimps not being monkeys thing - so, like you say, just a poor cartoon really.

Billy: Even better is when a public figure has to carry a briefcase with his name on it. Because the cartoonist can't draw him well enough, one supposes.

Geoff/Garfer: It's not an episode either of them liked to talk about. Although when the best man, Anthony Eden, sold the story to the tabloids they had to come clean.

That would freak out Delonas and the Post, OPD - accuse them of being anti-police subversives.

Hmm, wouldn't it :) I'd only tried to evaluate the cartoon on its own, erm, merits earlier, but having now checked out the Gawker link... well, what a pleasant fellow.

I'm glad you've posted this. I think I even said out loud to the newspaper, "that's not a monkey." And like most bad humour, it doesn't work on more than one level.

I know, OPD. One feels he has a few unresolved, uh, issues.

I think if Delonas's fans encountered something that worked on more than one level, FR, their brains would start to ooze out of their noses.

I prefer to think of the driving licence shenanigans not so much as a true-life Irish joke than absolute proof that coppers are thick wherever you go.

Fair point, Malc. But do you remember the guy heading the Shergar investigation?