I've been on Facebook for over two weeks now, so I reckon it's high time I made some hasty, sweeping generalisations about the experience I resisted for so long.

First, it hasn't really become the time thief I thought it might be (which is what dissuaded me from joining). After the initial frenzied delight of catching up with several friends I thought had vanished into the ether, it's just become another site I check when the thought strikes me. I don't use it at work, which puts it on a par with Twitter or LibraryThing, as things that are nice to have around, but it wouldn't cause me immense pain to lose them (unlike this blog, which is like a finger at least). 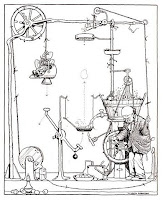 So what's wrong with it? Well, first of all, it seems to be a bells-and-whistles, belt-and-braces, jack-of-all-trades, how-many-more-bloody-cliches-can-he-squeeze-in bit of digital kit, part blog, part messager, part dating service, a sort of Web 2.0 WalMart. Which sound fabulous, but I've always been wary of things that claim to be able to organise your social life *and* cut your toenails; possibly something to do with my childhood crush on Professor Branestawm and his amazing contraptions that aimed to solve 10 problems at once and ended up causing 20. I'd rather have a thing that does a thing properly, and another thing that does another thing properly; but it's OK if all the doing things fit in one box.

There's something else, though. Facebook is all about connectivity, linking to people, poking them, throwing sheep and prog rock paraphernalia at your virtal chums. Actually putting things up for people to read or watch or look at or listen to, and upon which they can comment if they so wish, isn't such a priority. Contact is more important than content; compared with the blogosphere proper, there's far more talk, but it's ultimately *about* less.

And it's also essentially closed off to those who don't feel the urge to join, whereas everyone knows the best thing about blogging is the lurkers. (Hi guys, you're all beautiful!) So for those of you who remain resolutely unfbooked, here's something I put up there as part of one of those daft tagging bouts we bloggers grew out of a couple of years ago:

25 random things about me

1 The period/full-stop key on my laptop appears to have stopped working, which may account for some interesting typographical phenomena in this note

2 I have lived on three continents

4 I have three corns on my left foot

5 Sometimes I have to slap myself (metaphorically) to remind myself that I'm not a failure; I've achieved several things that most people haven't and won't

6 Yesterday I saw the film The Baader-Meinhof Complex, which was far better than I was expecting, albeit it rather grim

7 I sometimes find myself grasping for specific words; "synergy" is one

8 I dislike shaving but I'm not that keen on having a beard either, because it itches

9 I tried contact lenses a few years ago and it wasn't a success; I am happy being a four-eyed gogglebox

11 But I would have wanted to hang out with Waugh and Eliot and Joyce and Scott Fitzgerald and groovy people like that; I'm well aware that most people in the 1920s/1930s didn't do that sort of thing

12 For a brief period in my early teens, my favourite films were Hellzapoppin, Skin Game and Mr Forbush and the Penguins

13 Pathetically, my only episode of shoplifting was taking a single barley sugar from the pick 'n' mix at Woolworths, but I put it back a few minutes later

14 I am a bit of a fence-sitter in the Middle East conflict, in a "hey, why can't you guys just sit down and have a coffee together?" sort of way

16 I don't believe in God, but I do like and admire several people who do; I think Richard Dawkins can be as prescriptive and obnoxious as many religious fundamentalists

17 Raspberries are my favourite fruit

18 I can't believe how much TV I used to watch

19 Yesterday, I had an idea for a new blog, but it will be quite time-consuming, so it may have to wait a few months

20 I really ought to start running again

23 I haven't really offered up many deep dark secrets in this note, have I?

24 I think I probably don't have any

25 Which may be the biggest revelation of all
Posted by Tim F at 6:40 am

Is Professor Branestawm the one who designed a car which was a bit like a palindrome - if you found yourself driving the wrong way, you could just swing the seat 180 degrees and backwards became the new forwards?

It could easily have been someone else, but the name does ring a distant bell...

My favourite thing about Facebook has always been the status updates. I love to know what people are doing and thinking, which perhaps explains why I hardly ever log in to Facebook now that I've found Twitter.

That said, it is an extremely convenient way to arrange group meet ups.

Billy's right: Facebook is the Coldplay of the internet. I was discussing it with my friend S the other day. She says she loves it because she can find out about local events and see who's going to be at them before she decides to go. In that way, Facebook is providing a better alternative to local newspapers, which is quite interesting.

The main reason I don't like Facebook is that you can't meet new people on it. Although I must admit I do like looking at other people's photos.

Facebook is the perfect vehicle for stalking your children.

EW: Middle right. You don't know you'd miss it till it's gone.

We all haz lolcats now, FR.

That sounds about right, Chris. And he had a housekeeper called Mrs Flittersnoop.

That's what I mean by it being too belt-and-braces, Bureauista. It seems convenient to have all those functions in one box, but sometimes the near-Luddite simplicty is Twitter is all you need.

But that's a self-perpetuating thing, isn't it, Billy? Anything that's a) essentially user-generated and b) massively popular is inevitably going to be a bit bland in places.

But Rog, don't you get depressed that they're not misbehaving enough?

But no longer a lurker, Doppelganger. DOH!

I've just remembered, I've got a little doodad in Blogger that flags up my most recent Tweet. It's in the right-hand column somehwere. Some completely ignore everything I said about purism.

The wv is "heleuric", which has got to be an adjective meaning "sounding uncannily like Leslie Philips talking in a French accent".

Surely the Losing Facebook is about to appear in Asia at some point.

True, Charles. But it's rude to draw attention to the fact.

1. After a long time on Facebook, I've sort of eliminated a lot of the clutter (apps and so on) and boiled it down to the aspects that are interesting to me. I like that each person can boil it down a little differently.

2. Patroclus is right — FB is no good for meeting new people, and blogging is great for it. But I don't think of FB and blogging in the same way at all. I use FB for keeping up with faraway loved ones. I use blogging to think out loud and to meet new and intriguing people.

BTW I like reading other people's "25 Things" list, but I am still resisting writing my own. Even though I've been tagged a couple dozen times. I don't know what that means.