...but Giant Haystacks was better 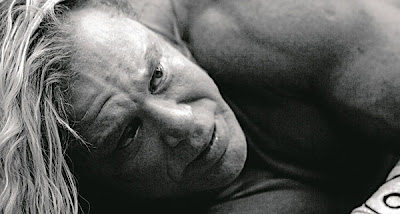 Can anyone tell me what happens in the last 20 minutes or so of The Wrestler? The DVD I was watching crapped out at that point.

It’s after the bit where Mickey Rourke snorts coke, shags the annoying blonde woman and wakes up in that room surrounded by pictures of firemen.

Did you mention firemen?

Mickey has to retire from wrestling when his face falls off.

(Haven't seen it. Bit scared to, in case his big melting plastic face and pumped-up body give me nightmares. I hear it's good, though.)

Reminded me of Kent Walton. Thanks Tim.

PS - do you remember Big Daddy? His real name was Shirley. Probably why he became a wrestler.

***END OF SPOILER ALERT. WE APOLOGISE FOR ANY DELAY YOU MAY HAVE EXPERIENCED***

He opened a wardrobe in the room full of pictures of firemen and it was full of neatly arranged suits. He put one on and walked out of the house straight onto a red carpet. An awards ceremony was taking place. And he won an award and it meant he was back. Everyone cried.

Yup, Shirley Crabtree. And did you know that Giant Haystacks - 'Stacks - as he was known, once got stuck in the loo on a flight to South Africa. They had to dismantle it at Jo'burg aiport just to set him free. Honestly!

Oh sorry, absolutely know idea what happens in the film. But you can guarantee it was a fix.

Good work, people, do keep it up.

The Queen Mum used to watch the wrestling on World of Sport. Nobody can claim that the Windsors aren't intellectuals.

The French like Mickey Rourke. I think Mickey should wrestle Nicky Sarkosy on the front steps of the Elysee.

Did he swear unexpectedly?

"It’s after the bit where Mickey Rourke snorts coke, shags the annoying blonde woman and wakes up in that room surrounded by pictures of firemen."

Spooky! Apparently Mickey is in a relationship with Courtney Love, so this probably happened in real life, except for the bit about the pictures of firemen.

Did he have a tag contest with Mickey Rooney against Mickey Dolenz and Mickey Mouse?

Voyager gets back to Earth
Buffy gains a new maturity
D'Angelo, Stringer and Omar stay dead.
Meadow enters the restaurant, Tony looks up and the screen abruptly cuts to black and silence

You’re all far stranger and more wonderful than I have any right to expect. Thank you. Now please bugger off before I start going the same way.

Ha ha - Kendo Nagasaki who's real name was Gavin or Clive or something like that. Hilarious. My 'Nana' used to make us all religiously watch it every week - even in the heatwave - memories of peeling the backs of my legs off the vinyl sofa. And there was that unruly one Bobby something with the wild blonde hair and giant comb - Nana didn't like him - she said he was 'dirty'. I thought he had nits when she said that. La la la. can't wait to see The Wrestler.

Sorry - I think I just committed punctuation cardinal sin with the who's whose thing - eek.