Bailey, Banksy and the thing too horrible even to be mentioned 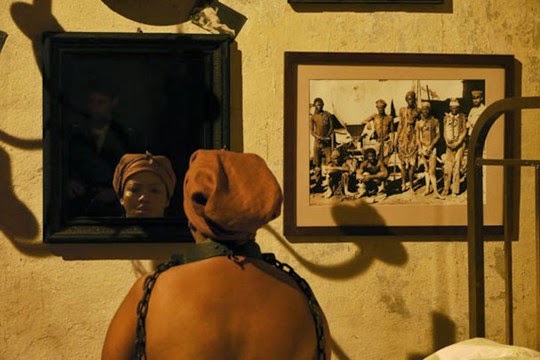 Racism is bad. I trust we’re all on the same page as far as that’s concerned. But what to do about racism, how to respond to it, how to discuss it — these seem to be rather more divisive questions.

Take, for example, the installation Exhibit B by Brett Bailey, which features chained black actors in an effort to represent the true horror of human slavery. Or rather, it featured them, until protests against the “complicit racism” of the show forced it to close. The artist wasn’t actually suggesting that slavery or 19th-century human zoos were in any way a good thing; but people were offended by the scenes of degradation on view (or not on view — it’s not clear how many of them had in fact seen the show) and blockaded the venue and that was that.

Then, the good burghers of Clacton-on-Sea took against a new piece by the artist Banksy. Here it is: 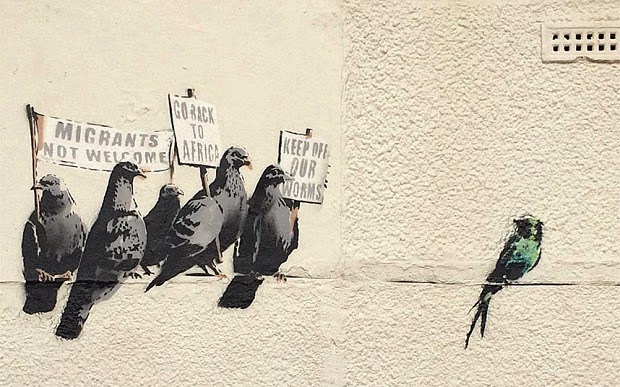 OK, not one of his best works, maybe, but the message is pretty clear, I would have thought. Racism, including the disingenuous I’m-not-a-racist-but anti-immigration message being touted by the likes of UKIP (widely expected to win the imminent by-election in Clacton) is pretty bird-brained. But the image disappeared within hours and Nigel Brown, the council’s communications manager, said:

The site was inspected by staff who agreed that it could be seen as offensive and it was removed this morning in line with our policy to remove this type of material within 48 hours.

Get that: “it could be seen as offensive”. Presumably they understood that the artist’s intentions were entirely right and proper, but on the offchance that someone, somewhere, somehow might misinterpret them, the image was destroyed. The eternally sage and perceptive Annie pondered on Twitter whether the fact that the artists in these cases were white may have had a bearing in the case (although there’s no evidence that the factotum who erased the bird mural even guessed who’d created in, which adds another level of dumbness to the equation). But then I discovered that US school students’ access to novels by Toni Morrison and Alice Walker has been restricted because of their depictions of racism.

What unites these cases is that the intention of the artists is entirely irrelevant. The protesters and censors and council scrubbers seem to be worried that the very subject of racism is being raised in anything but the blandest, most nuance-free terms. Racism has become Voldemort. And although they don’t specify who is liable to be harmed by these artworks and books, I’d infer that its members of the ethnic minorities who are foremost in their minds. Which in turn suggests a rather patronising frame of mind, an assumption that non-white people are intellectually or emotionally incapable of coping with the subtleties and ambiguities of creative communication. And there’s a word for that.

For a more sensible approach to the whole subject, here’s Tom and Jerry. No, seriously. Aware that some people are uneasy about the depiction of the character Mammy Two-shoes in the evergreen cartoons, Amazon and iTunes have added a disclaimer:

Tom and Jerry shorts may depict some ethnic and racial prejudices that were once commonplace in American society. Such depictions were wrong then and are wrong today.

There you are. Nothing censored, nothing prohibited, nothing scrubbed off the wall. Just a pale amber alert, a gentle acknowledgement that some people may not like something included in the product, like a “MAY CONTAIN NUTS” warning. It would be nice if some of those who’ve objected to the works of Bailey and Banksy, Morrison and Walker could take the same attitude; but I’m not holding my breath. 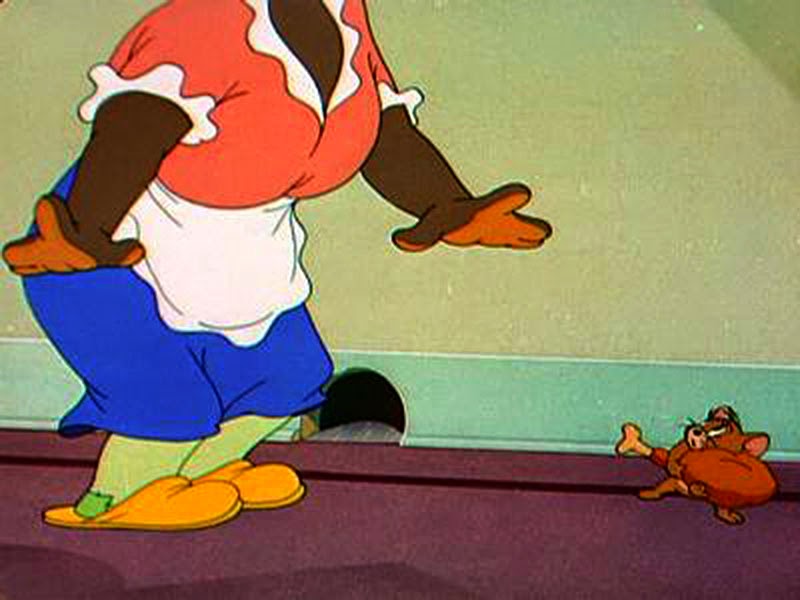 PS: More on this by Laura Mallonee at Hyperallergic, with specific reference to Scandinavia.
Posted by Tim F at 8:10 am

This sort of censorship in the name of political correctness is terrifying to me. The implications (and the slipperiness of the slope) are fairly dark.