About ‘God Only Knows’ 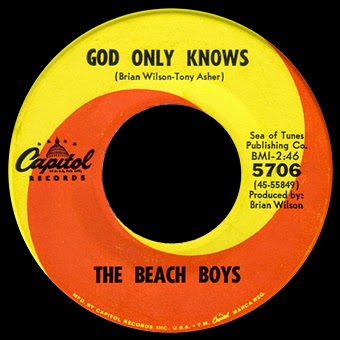 ‘God Only Knows’ is probably my favourite Beach Boys song. So, it’s not the most crushingly obvious choice (that would be ‘Good Vibrations’ or maybe ‘California Girls’), nor is it just trying to be obnoxious for the sake of it (‘Kokomo’) but it’s not exactly out of the box either. A proper smartarse, offering his personal BB fave for a 20-page retrospective in Mojo or Uncut, would plump for something rather more obscure from Smile or Surf’s Up. But I like ‘God Only Knows’. So shoot me.

Or you could just shoot whoever decided to make ‘God Only Knows’ the latest Everyone Gets To Sing A Line, Even The Token Bloke From Senegal Or Wherever, Quite Yer Moaning It’s For Charity, Can The New John Lewis Christmas Ad Be Far Behind BBC Children in Need single. No, stop, don’t really shoot. In purely musical terms, I’m sure it’s not the most hideous version of the song ever committed to whatever it is songs are committed to these days. (The Bowie one was pretty sucky, for a start.) It’s not even the aura of smug self-satisfaction that hums off these records that’s the problem; the BBC has been getting so much politically motivated flak in recent years, any reminder of the extent of its riches has to be a good thing, even if that encompasses a cameo by old tortoise-face from Coldplay and Brian May doing the same guitar solo he’s been playing since about 1346.

No, it’s not so much what they’ve done to my song, ma, it’s more about how it changes my relationship with that particular piece of music. Within a few days, ‘God Only Knows’ will cease to be a Beach Boys song. It will become a charity single and if people chance to hear the original they’ll be confused because they’ll be expecting Emeli Sandé or One Direction or Stevie Wonder or that nice trumpet lady or the skinny choir bloke to be on there. Of course, the same thing happened with ‘Perfect Day’, which suddenly ceased to be a wistful paean to heroin and became a song about a day that was quite nice actually, with a bit by Westlife. In fact, ‘Perfect Day’ occupies a similar place in Lou Reed’s oeuvre to that of ‘God Only Knows’ in Brian Wilson’s; the mind-numbingly obvious pick would be ‘Walk On The Wild Side’, while clever-clever music critics would pick side three of Metal Machine Music.

But in both cases, the BBC has a lucky charm against any criticism of the recording. “Look, it can’t be that bad,” they’ll chide. “Brian Wilson’s playing on it. Just like Lou Reed did.” Which of course smudges over the fact that both Wilson and Reed are/were spectacularly odd and damaged individuals, a fact that is intrinsic to the weird brilliance of their music but has also led them down some pretty awful avenues (such as their collaborations with Status Quo and Metallica respectively). The cosy niceness of the BBC singles is just a minor late-period mis-step when seen in the broader context of their careers. Still, it’s a pity. ‘God Only Knows’ suddenly isn’t my favourite Beach Boys song any more.

PS: The Daily Mash gets it right, as is so often the case.

PPPS: ...and Michael Hann gives each performer on the BBC version marks out of 10.
Posted by Tim F at 6:48 am

I watched it - thank you for that, I suppose. The highlight was Brian Wilson - seems like the only person who had any feel for it.
Do it again.

I expected to be angry but it just made me profoundly sad.

Thanks, I'll go out of my way to avoid hearing that as GOK is my favourite Beach Boys song too, when he's not looking a people with no clothes on and commenting on their flabby bits.

However, although I agree that Perfect Day was ruined for a year or two by the aforementioned travesty, history has surely all but forgotten that now and I (for one) hardly ever think about it when I hear the original (although I do still think about Trainspotting). So I guess in another 10 years or so, everyone will have forgotten this too.

I loved it. And I loved the BBC Perfect Day which was even better. So shoot me

GOK was already a bit dented for me, by the closing sequence in Love Actually. You know the one...

And I agree with Rol, the Beeb's version of Perfect Day has faded a bit now, maybe because half the people singing on it have themselves faded. Yet the original persists, so maybe GOK will recover.

Brian May's being playing the same guitar solo since quarter to two?!?

I don't think anyone will ever really know what goes on in Brian's head, Vicus. Least of all him.

Yes, Andy. In a "so this is what civilisation has come to" way.

Some of us may not have another 10 years, Rol.

I managed to avoid Love Actually, Martin. I believe it was about English people, right?