A death in Kensington

A man has been found dead in London. Not in itself a huge news story, but the context brings it to the attention of a national publication such as the Daily Telegraph. For a start, he was impaled on railings, which adds a certain gruesome curiosity value to the event; Gothic overtones, maybe, flashbacks to Satanic spearings in movies such as The Omen.

But it’s not just the mode of his demise that matters. Apparently the railings are next to the school attended by David Cameron’s children, which is on “Kensington Church Walk, one of London’s most exclusive streets, on which the average property price is £1.6 million.” So it’s not just a death – there’s a splash of celebrity and a stiff dose of property porn in there. And the privileged setting adds a rather ironic twist to the current line of enquiry, which is that the (anonymous) deceased was homeless; the spikes can be seen as an extreme manifestation of the “hostile architecture” increasingly used in public spaces to deter undesirables from hanging around for too long. In the words of the Parks Police constable: “We do have a problem here with homeless people and the number of them has increased by 200 per cent in the last year. It is a growing problem which we are tackling.”

Never mind. I guess this is one less “problem” for him — and for David Cameron — to tackle. 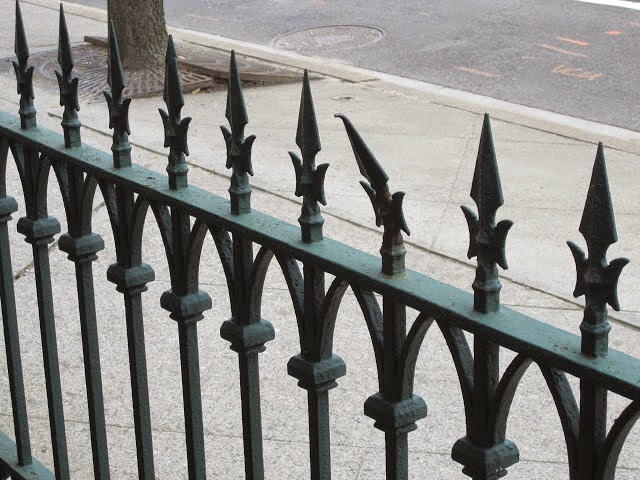 PS: The Express goes one better and brings a royal angle to the story.
Posted by Tim F at 6:32 am