That Kent State shirt and the ultimate triumph of consumer capitalism

Back when I was young and halfway pretty, I got myself involved in a bit of studenty politicsy shenanigans that ended up with a bunch of us barricaded inside the offices of the university vice-chancellor. (He’d attempted to carry on working for half an hour or so while various middle-class Trots and greboes glowered at him, but in the end gave up and vacated his space, presumably deciding that he’d get more done somewhere that didn’t smell of an army surplus store.)

After a brief period during which we luxuriated in our triumph over The Man, the realisation began to sink in that: a) we weren’t quite sure what to do next; and b) we were breaking all sorts of laws and were running the risk of getting arrested and/or chucked out of university. Damn, we were political agitators, a threat to global capitalism itself — they’d probably send in the SAS to get us out. That was when I, working on the principle that the best way to get to know someone is to check out his/her bookshelf, noticed that our unwilling host owned a copy of the official report into the Kent State University shootings that resulted in the deaths of four students after the Ohio National Guard opened fire in 1970. Shit, as I don’t think we said back then, suddenly got real. 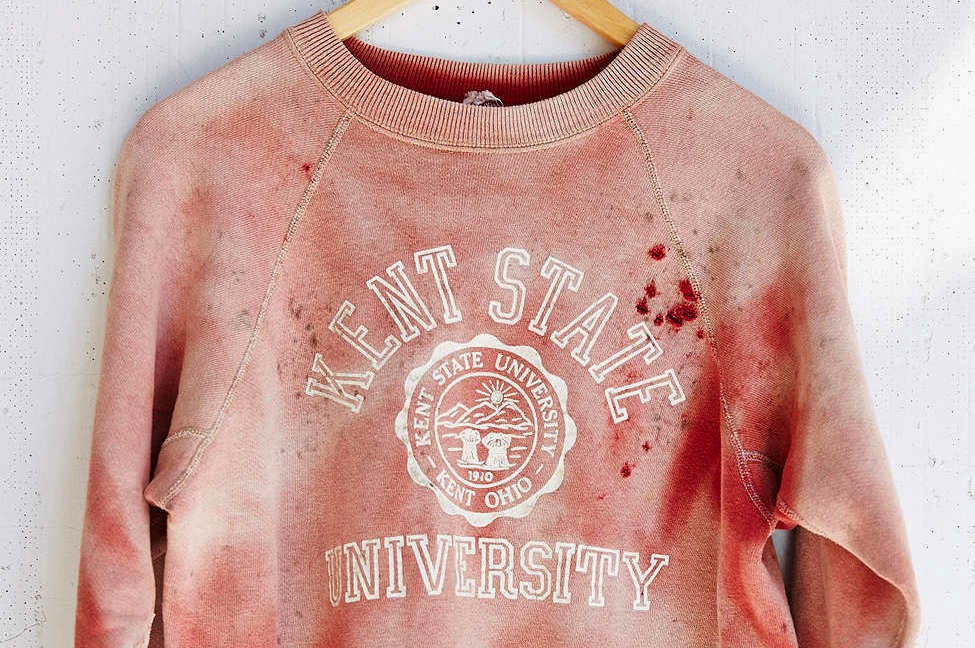 Which is a roundabout and slightly self-indulgent way of acknowledging the brouhaha created by Urban Outfitters’ decision to market a sweatshirt that seems to nod to the Kent State tragedy. And yes, they’ve been forced to apologise, but that’s not the point: we’re talking about Urban Outfitters without them paying us to. That’s the point. It’s a perfect example of recuperation, the process in which radical images and concepts are co-opted to reinforce the status quo. They won, comrades. We lost. And they didn’t even need to send in the SAS.

But while we’re here, do people really still wear sweatshirts?
Posted by Tim F at 6:46 am