Audrey Hepburn’s bra: the revenge of the East

God knows the West has had some daft ideas about Asia over the years. From the prurience of 19th-century Orientalism via the half-arsed borrowing of religion and philosophy that characterises New Age thinking through to every movie that’s been badly and pointlessly remade — although I still maintain that The Magnificent Seven is more fun than Seven Samurai even if it’s not actually a better film — I’m sorry. That said, Asia’s more than capable of missing the point when it comes to Western culture. Call it Occidentalism.

For example, a Thai lingerie firm is currently running a big campaign featuring a well-known model/starlet adopting a selection of Hollywood poses that I’d describe as iconic if that word hadn’t by now been devalued to a point where it’s essentially meaningless. The problem is that the images take what’s most obviously appealing about the originals (famous, stylish, beautiful woman) without really delving into what it represents to people who may actually have seen the film rather than just checking out the DVD cover. 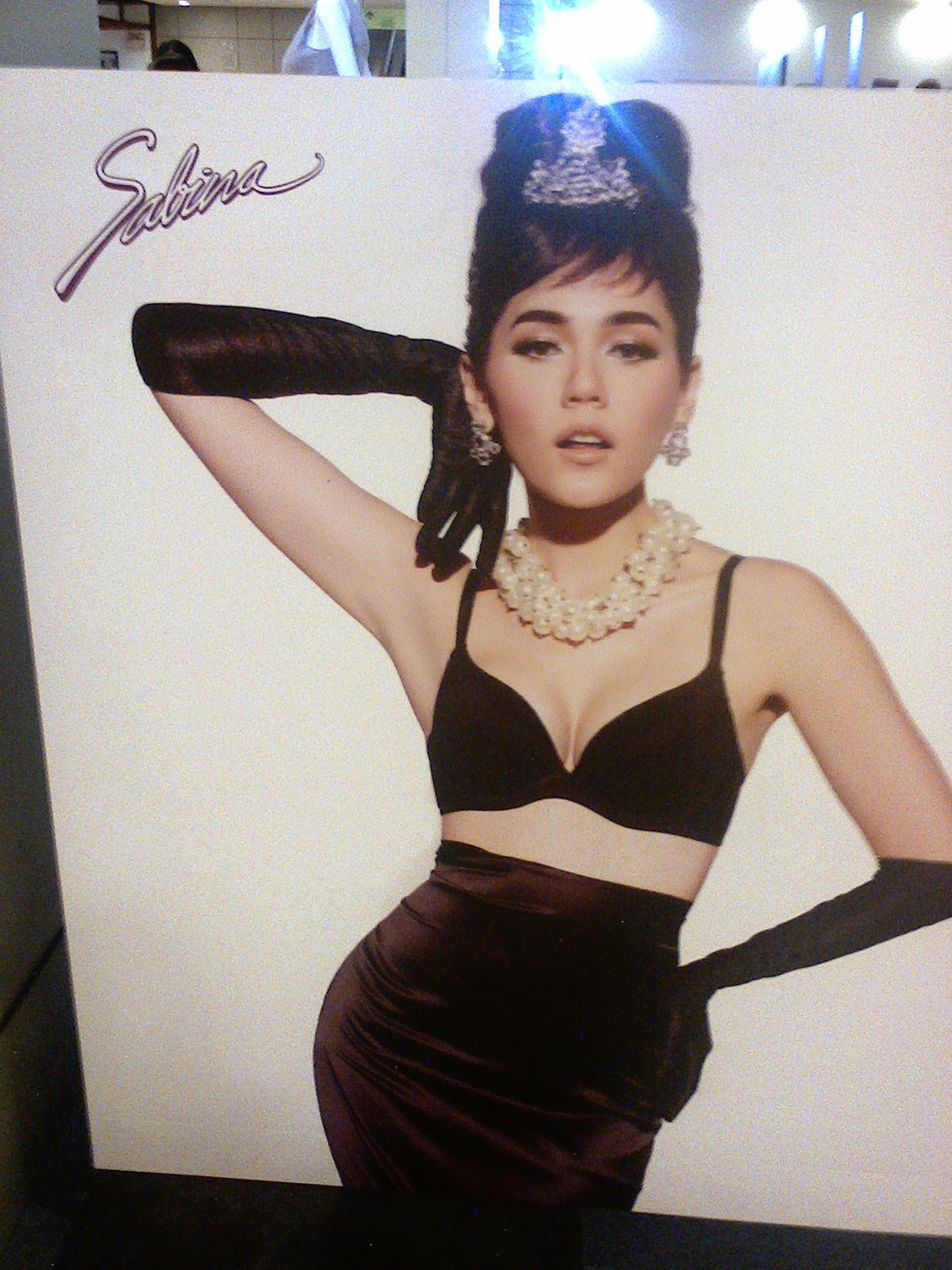 So let’s start with Audrey Hepburn. The whole damn point of Audrey Hepburn was that she could be elegant and sexy without the need for big knockers or an enhanced cleavage and certainly felt no obligation to flash around what little she had. If there’s a single movie legend who looks out of place advertising bras, it’s either Audrey or John Wayne. And, as inevitably happens when people try to sum up her particular charm, it’s Breakfast at Tiffany’s, one of her worst movies, that gets picked as a reference point. And in it, Audrey was playing a character who may not have been a hooker exactly but was something pretty close, which I’m not sure is quite the sort of role model the brand wants to present to the Bangkok middle classes. Maybe this is just payback from Asia for Mickey Rooney’s horrific yellowface act in the film? If so, fair enough. 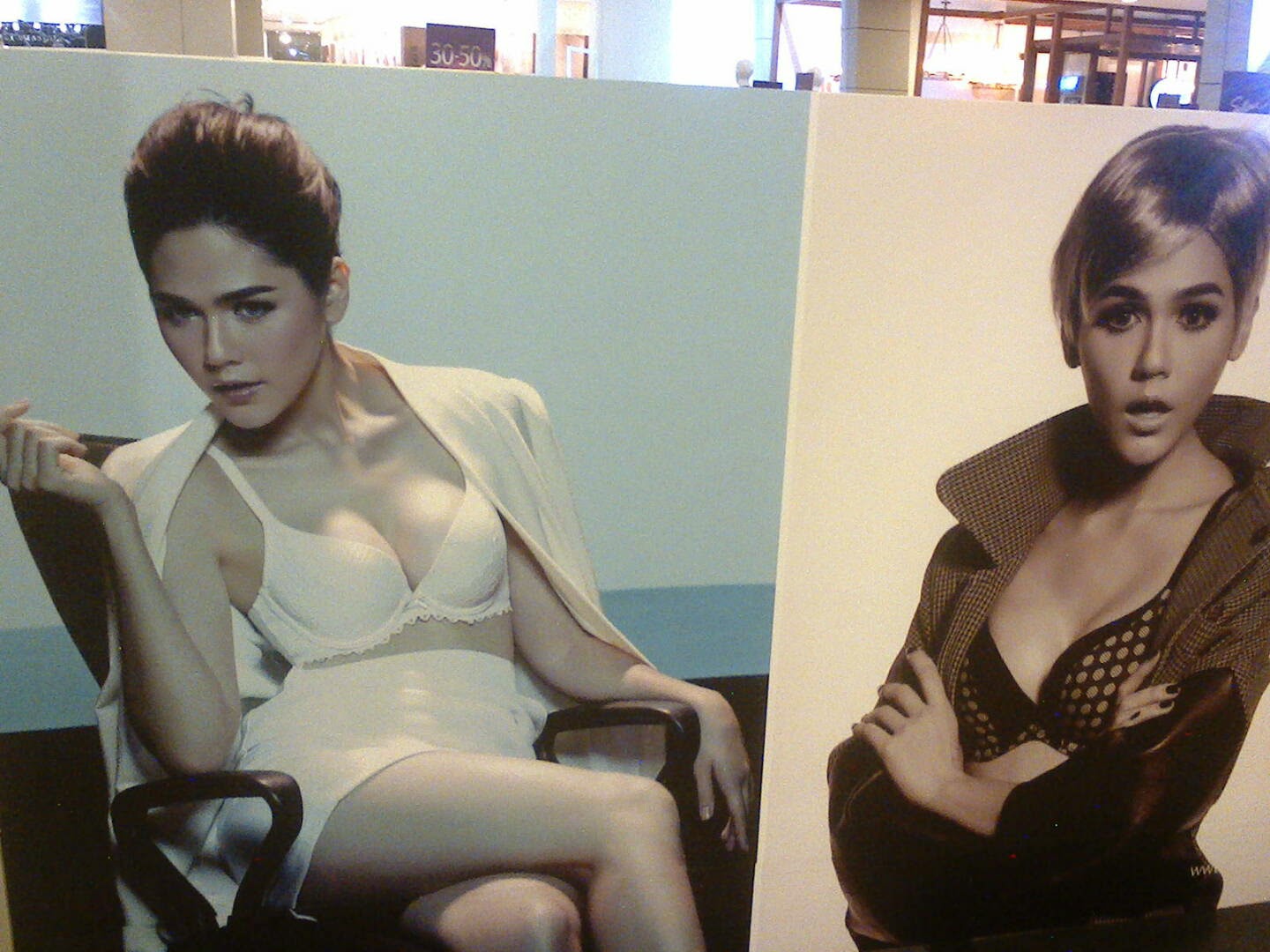 Next, on the left, we have Sharon Stone in Basic Instinct. Now, it’s a long time since I’ve seen the movie, but as I recall, the whole point of this scene is that Ms Stone’s character isn’t wearing any knickers — which makes it a very odd reference point for a company that makes undergarments. I’m not even sure who the one on the right is meant to be, by the way. Edie Sedgwick? Frankie from The Saturdays? A very young Angela Merkel? Answers, please, on a pair of Sharon Stone’s unworn knickers. 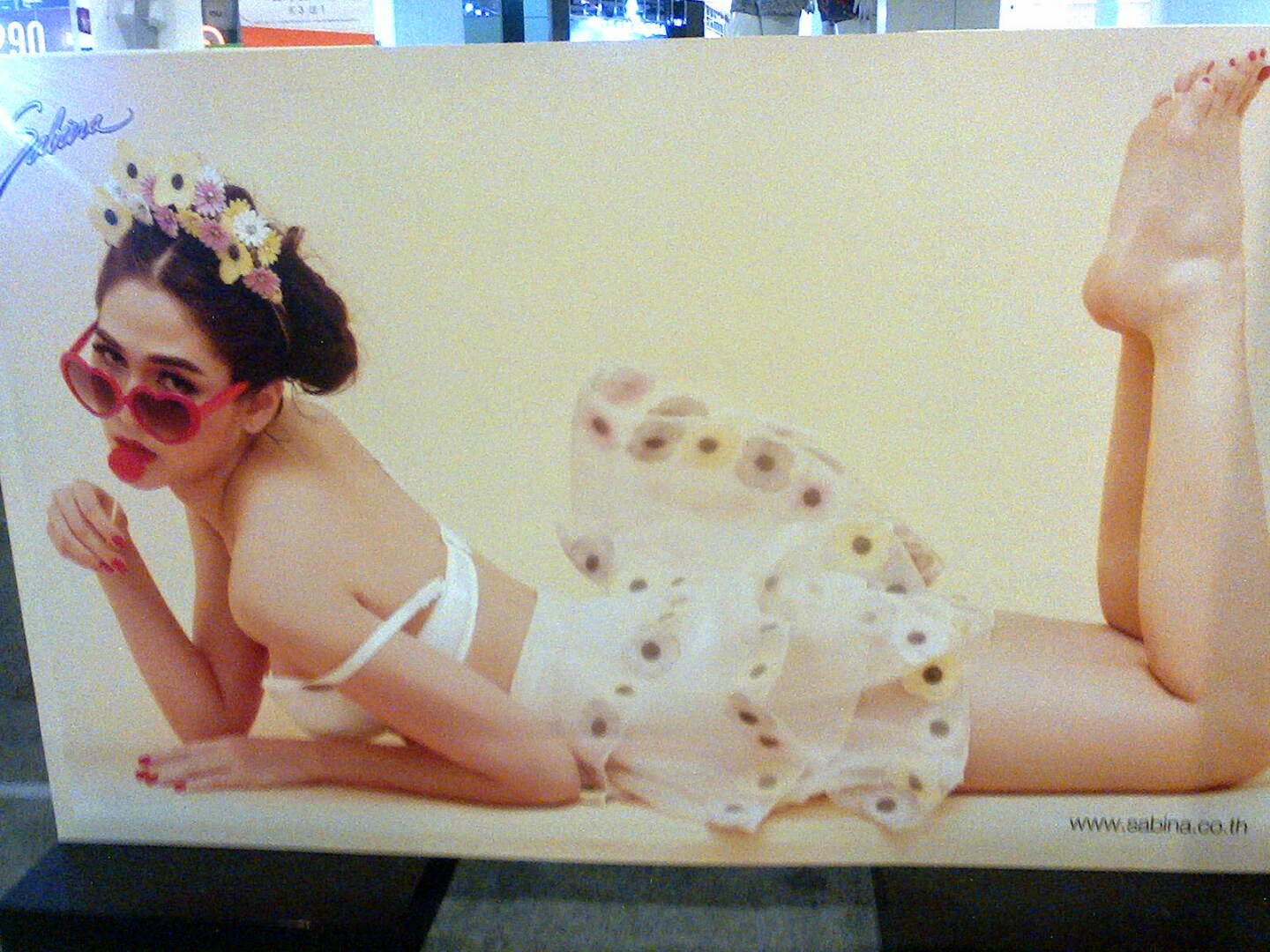 But this is the one that really unnerves me. The reference is presumably to Dominique Swain in the 1997 adaptation of Lolita, which may have been more faithful to Nabokov than Kubrick’s earlier version but was otherwise worse in pretty much every respect. Leaving that aside, child abuse is at the heart of the movie and the seductive, lolly-licking, bra-strap-dropping, skirt-lifting character being portrayed in this picture is meant, in the novel at least, to be just 12 years old. In this case, I really do hope they’ve missed the point.
Posted by Tim F at 11:33 am

Zoinks! I don't find anything wrong with the poses, uninspired and derivative as they are, but that last one is creepy. Much like the recent use of the Guy Fawkes mask that Thai protesters used, the undertones of this image have been, uh...misunderstood, to say the least. Also, is it just me, or is the Audrey Hepburn woman's head unnaturally big?

Creative misunderstanding as a cultural norm. Thanks, Greg, you just chose my PhD thesis title.