Waiting for the Bullet: a disclaimer with a review attached

Critics are supposedly obliged, when considering a product created by someone they know, to insert a disclaimer of some kind, to make clear what the relationship is. I’m not sure how scrupulously this needs to be enforced: surely if your career’s at the level where you find yourself on panels at literary festivals and competitions and academic symposiums the chances are you’ll be in a state of at least casual nodding acquaintance with the majority of people whose books cross your desk and it would be more efficient to insert the opposite of a disclaimer (a claimer, maybe?) when you review something by someone you’ve never heard of. Do you need to announce whether you have some particular reason to dislike the person (ex-lover, bullied you at school, once spilled your pint, etc)? And what about people with whom you’ve been in purely digital contact? Does that require a flag of some kind? I remember when the blessed Patroclus reviewed one of my books on Amazon and outed herself as a friend despite the fact we’ve only ever once met in meatspace; which she neatly defined as a very Noughties kind of relationship and hence entirely appropriate to the book. 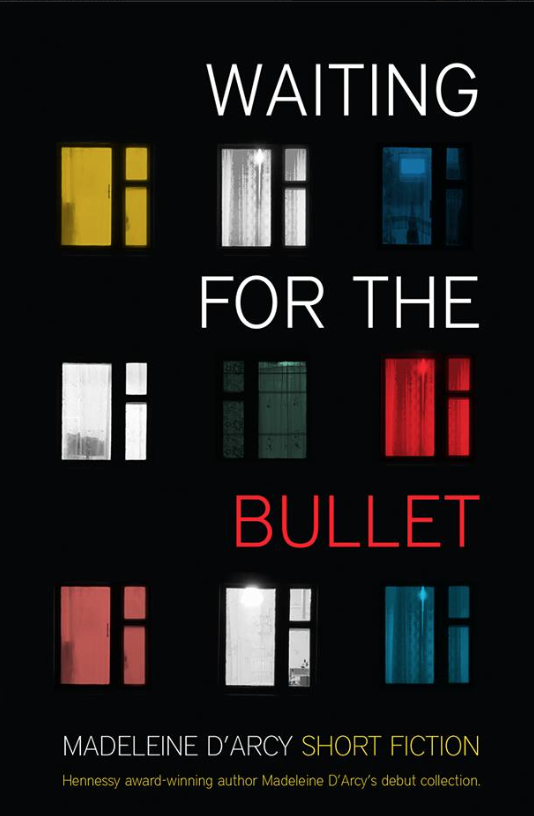 Still, better safe than sorry: I hereby declare that, yes, I know Madeleine D’Arcy, the author of the short story collection Waiting for the Bullet. Or should I say that I knew her? I worked with Madeleine in the dim and distant early 1990s, in a London office that was supposedly the location of Mrs Lovett’s pie shop in Sweeney Todd. I last saw her in about 1994, although we recently stumbled over each other via Facebook (other social media sites are available). She’s lovely. And Irish. And not very tall. And she says “aargghh” a lot, I mean, she really says it, as it’s written, sounding the Gs. Which is a bit like people actually saying “LOL” and “ROFL” but somehow more endearing.

That done, should the fact that she and I once knocked off work early to amble down Fleet Street in a vain search for hot whiskey affect my response to her book? I hope not. She’s a tough cookie and if I were to make disobliging remarks I’m sure she’d survive the experience. Although she was a criminal solicitor once, so maybe she’d just get some hard acquaintances to give me a fright. It’s academic, because I liked the book a lot. All the stories deal with the flaws and frailties of human relationships and interactions, whether between husbands and wives, parents and children or lovers who are running out of love. Death looms more than once and there’s an air of wry melancholy about most of the stories, often accentuated by the background noise of the grievously wounded Irish economy, but D’Arcy doesn’t bang a drum – her focus is always on the people, in all their bumbling, messy, imperfect glory.

So, there, it’s a good book, and I would have said that whether I’d ever known the author or not. However, there’s something deeper going on, a connection not just with the author but with the book itself. No, I’m not in it. (As far as I know, I’ve only ever featured twice in works of fiction, when my name was appropriated first for a Doctor Who novel, then for a story in the Commando comic series.) But one of the stories did strike a chord, throwing up memories – not at all pleasant ones – of a particular episode more than 20 years ago and possibly even filling in a few gaps for me. Or maybe not: when I waved the evidence under the author’s digital nose her response was simply that “of course it's fiction — only made-up stuff.” Which is of course what they all say, but to protect her sources I won’t reveal which of the stories had that effect on me.

And one day we’ll find that hot whiskey.
Posted by Tim F at 6:29 am