As I keep explaining to people whether they’re interested or not, Cultural Snow takes its name from a passage in Haruki Murakami’s novel Dance Dance Dance: scroll down to find out more. Inevitably, as soon as I’d started blogging under that label, my initial enthusiasm for Murakami’s works began to ease off a little. I’d still buy the books when they came out, not even waiting for the paperback, but they all started to feel a little samey, what with the lonely protagonists and the talking animals and the enigmatic, damaged girls and the non-penetrative sex and the jazz and the cooking interrupted by phone calls. After getting hold of his most recent blockbuster, 1Q84, with its Chip Kidd cover and left-field typography, I tried to get into it, I really did, but things ground to a halt after about 150 pages. It wasn’t entirely the author’s fault, though – I’d reached a point where most of my reading was taking place in transit and lugging around HM’s doorsteppiest doorstep yet didn’t, like, fit with my lifestyle choices, y’know.

Then, since I was going to Japan and it seemed somehow appropriate, I bought the Kindle version and started again. And yes, the protagonists are lonely and the girls are damaged and there’s quite a bit of jazz but hey, what’s wrong with that? And the sex is penetrative this time, if deeply weird and unsettling. And, near the beginning of the third and final volume, something catches my attention. (It’s a phone call in a kitchen but the recipient isn’t cooking, just drinking coffee, so that’s a bit different, I guess.)

Tamaru was silent again for a moment, and then spoke. “Have you heard about the final tests given to candidates to become interrogators for Stalin’s secret police?”
“No, I haven’t.”
“A candidate would be put in a square room. The only thing in the room is an ordinary small wooden chair. And the interrogator’s boss gives him an order. He says, ‘Get this chair to confess and write up a report on it. Until you do this, you can’t leave this room...’”
“So what kind of confession did the interrogator candidates extract from the chairs?”
“That is a question definitely worth considering,” Tamaru said. “Sort of like a Zen koan.”
“Stalinist Zen,” Aomame said.
After a short pause, Tamaru hung up. 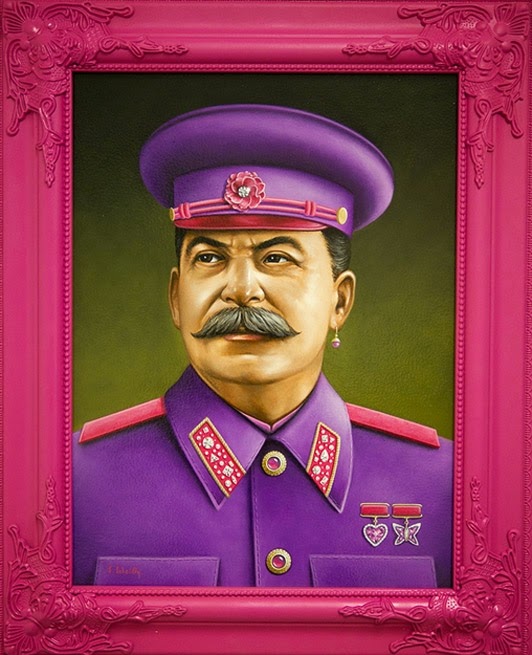 It's certainly no Google rebrand, but I like it.