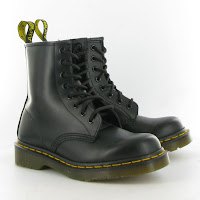 I was rather startled to learn the other day that Dr Martens has a bespoke service. Actually, it could be argued that what the venerable cobbler is offering is a made-to-measure service, since the customer is restricted to variations on the classic 1460 and 1461 styles but, pedantry aside, it does seem that the brand’s values have shifted somewhat from the days when a pair of Docs was de rigueur if one was attending a Wedding Present gig or an anti-apartheid demo. On the other hand, I guess Docs were always a bespoke garment in a way, since they required a good 10 days of wearing in before they were truly comfortable (a process I described in detail nearly 20 years ago) which meant that each pair was uniquely bonded to the peculiarities of a specific set of feet. Some people, it appears, can’t be doing with this time-honoured ritual, which is why the company is now offering a broken-in boot, which can be worn with ease fresh out of the box.

To some of us wizened old farts for who the trusty Doc was a badge of all that is edgy and subversive, this pathological poncing around with the basic formula looks to be a classic case of missing the bloody point. Docs were often customised, of course, with spray paint and tinsel and nail varnish and sequins and more, but you did it yourself; you didn’t pay the company to do it for you. In some ways it’s an act of recuperation, taking back something that was once dangerous and co-opting it to the cause of capitalism. Although of course nobody’s really taking anything back, since all along the Dr Martens brand has been owned by the Griggs family. When they started marketing the shoes they were marketed as workwear, making the status of wage slavery just that little bit easier. Their appropriation by punks and other riff-raff was a pretty half-assed act of détournement (or even class tourism) because the owner of the means of production (and the recipient of the profits) remained the same.

Yeah, whatever. For the first time this century, I feel like treating myself to a new pair.
Posted by Tim F at 8:47 am

Back in the day I had a lovely cherry red pair.... a couple of months ago I bought a leopard print pair :-)
They are a lot lighter than the originals... and actually, more comfortable too.
My first pair came from a spit and polish workwear shop... my new pair, from a designery branded fashion store... they were in the sale though... couldn't resist.
Sx

I kept my favourite pair long after they'd gone crusty & unwearable. At a recent 'store event' in Shoreditch (I know, SHUTTUP !!) I realised all subversion was gone as they have a range of frocks, bags & very few boots any more. Still, nice that the kids still wear them.

These days when I see somebody wearing Docs, they're more likely to be a podgy middle manager desperate to pretend he's still a rebel at heart.

The sandal version always weirded me out.

Funny, I was just looking at this ancient photo from when we teenagers buying them in Camden market

That's progress, I guess, Scarlet :( In the old days we'd paint on our own leopard spots, before we stormed the barricades.

I thought that sort of person just bought a motorbike, LC?

Me too, Billy. Missed the point. Like a burkha with cut-out boobs.

Blimey, my mum would have given me a proper clip round the ear if I'd started daubing paint over my shoes.... this was back in the day when mothers were allowed to do this :-)
Sx

I'm a slow mover. I still have a 1995 8-hole pair of black boots, but am rarely plucky enough to wear them because I am now a comfortably-off home owner and no longer living on the budget I was on when I bought them....