How soon is too soon to view yesterday’s hideous events in Woolwich not simply as a brutal act of killing (which they were) but also as a performance, an attempt to grab the attention of the media by the simple act of doing something unexpected and horrific (which, if eyewitness reports of the perpetrators’ comments and actions are accurate, they also were)? Indeed, it represents a profoundly 21st-century outrage, as the alleged perpetrators apparently offered impromptu interviews, posing to be photographed and filmed by witnesses, and the first commentary on the attack that many encountered came not from mainstream news organisations but from the Twitter feed of a rapper called Boya Dee (“Then the next breda try buss off the rusty 45 and it just backfires and blows mans finger clean off...”)

It is not to discount the enormity of the crime, or the pain felt by the dead soldier’s family, friends and colleagues to suggest that the impact of the event transcends his life, death or even his identity; as I type this, we don’t even know his name. As Baudrillard wrote in response to 9/11, “Violence in itself can be perfectly banal and innocuous. Only symbolic violence generates singularity.” It’s the symbolism and the political meaning that makes this news rather than the death per se. Soon we’ll be informed of his identity and he’ll achieve a posthumous fame far in excess of that which adhered to him in life. But I can’t help but think that his killers might have been advised to take a tip from someone they’d probably regard as their ideological antagonist, the right-wing historian Dominique Venner, who shot himself by the altar of Notre Dame the day before the events in Woolwich. With his suicide, Venner might not have attracted many new recruits to his anti-gay, anti-Muslim creed but people have at least been forced to think about what may have driven him to do what he did; and nasty as his opinions may have been, the stunt that Femen pulled – an activist with an anti-fascist slogan painted on her bare breasts mocking his death by faking a suicide in the same location – seems even nastier. Yesterday’s events in London will have the opposite effect to what Venner manage, as bloody cleavers and a brave cub scout leader and less brave EDL opportunists crowd the scene. Apart from a vague gripe about what western soldiers are doing in Iraq or Afghanistan, what did it all mean? I’ve argued before that people who are prepared to die in a political cause ought to follow the example of the Vietnamese monk Thich Quang Duc or the Czech student Jan Palach and do something that doesn’t harm anyone else; they miraculously become freedom fighters while others labour under the label of terrorism. Unless something very peculiar happens, that’s not a fate that will befall the killers in Woolwich. 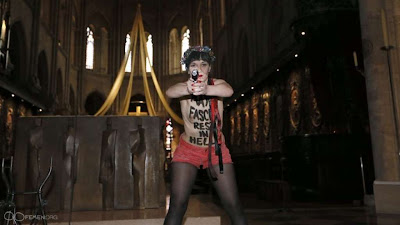 Very well written and thought provoking article.
I was watching some of the footage this morning and I was fascinated at how the attackers interacted with general members of the public (i.e. the person who recorded them on their mobile phone). They seemed to relish their moment of fame or rather infamy.

Have you seen this article?: http://www.guardian.co.uk/commentisfree/2013/may/23/woolwich-attack-terrorism-blowback

The killers are entirely to blame, but I can't help wondering why the witnesses reached for their 'phones when they could have been stopping the attack.

Thanks, Jo. Shocking as the attack is, I think that in years to come it will become more about media studies than history or politics. (See also the JFK assassination.)

Yes, thanks for giving an international perspective on this - I didn't know about the events in France. The feminist group's objection to the suicide in the church puzzles me slightly: so they are anti-facist, that's excelent, but presumably they're also anti-church and anti-pro-life (and not too keen on Islam either) and appreciate a good perfornace art event.