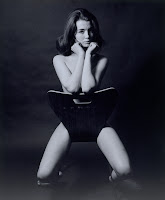 So I won’t speculate on any possible identities; except to argue that there’s only one senior Tory not in the Cabinet that anyone cares about, and everyone knows he’s an incontinent shagger anyway, and if there were revelations that put him in a bad light, it could only be good news for Cameron. The funny thing is, the story has arisen just a few days before the 50th anniversary of John Profumo’s resignation from the Commons, following his admission that he had lied about his relationship with Christine Keeler. Is this latest story of the same magnitude, or just a desperately concocted bit of tittle-tattle in order to make us think that newspapers might still be relevant? I have no idea. But some of the hideous images that have been rattling around my imagination since I first read the story are certainly not fit to publish.
Posted by Tim F at 8:56 am

'Tryst' and 'middle-aged' are concerning me. And how old is middle-aged exactly? And yes - I've had to stop thinking about it as my mind is conjuring up all sorts of terrible, shuddery tryst combo's....

Ha! Flanders and Swann would be proud of you. I do love a good non-story. It's a little early for silly season, tho; perhaps they're just warming up? Indigo

RoMo: Middle-aged is to remind us that we should not expect to be aroused by the rumoured coupling. I doubt whether either participant has what the Mail defines as a "bikini body"?