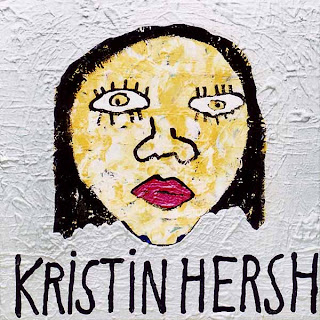 I sort of half get that. I certainly know what it’s like to encounter a piece of music, or a film or a painting or whatever, that overwhelms with its emotional intensity, and it’s too distracting and you’re not in the mood and you just want to hide. (Oddly, I’ve never found that with a book: I’ve been so utterly gripped by a novel that I’ve stayed on the bus to the terminus, even though reading on buses makes me nauseous, but I’ve never had to put a book to one side because it overwhelms me. Has anyone?)

Where I part company with Ms Hersh is over the matter of bad music. I don’t mind a lot of bad music,  in fact I often like it, whether it’s bad because it’s a bit cheesy (like this) or simply incompetent (like that). What I can’t bear is music that’s simply bearable and polite and does its job and doesn’t charge emotional overtime. And I won’t post a link to it, because it encompasses about 95% of the music that surrounds us.
Posted by Tim Footman at 6:51 am

Can recommend Kristin Hersh's book Ratgirl, (which explains how she perceives music very differently from most of us.)

The music I hate is the horrible,slick, plastic autotuned stuff, I think the genre is modern R&B. It sounds like nobody human had a hand in making it, but not in an interesting Kraftwerk type way. I genuinely can't bear it. Getting old - is this what our music sounded like to our parents?

The worst crime music can commit is to be dull.

Thank you for introducing me to The Shaggs.

I think she's being a bit disingenuous there. This whole business of being fan-supported through CASH Music has been brilliant for her (and us fans), but it does allow her to de-contextualise herself somewhat. There was a time she engaged with other music a little more:

Her head movements were as unbearable as David Gray's.

Too much to bear? I can't feel it that deeply. The pleasure and the pain never get to that level. Not since I was a teenage prog fan and jazz-funk loather, anyway.

I favour character over technical excellence every time.

Here's what EdiblePlanets said about The Shaggs: The hearing people want what the deaf people got.﻿
But actually they do have charm and give hope to the likes of me - which is bad news for music lovers.

As for intensely good music v reading - the experience is different because the book protects you, does not leave you naked, it's a barrier between you and the people around you. So you can stare sightlessly through misty eyes at the same paragraph without anyone noticing that you haven't turned over a page for ages. And with a book you appear clearly to be occupied, busy.
With music, whether your head is down or thrown back, eyes closed or wide open, tears streaming down your face or glowing with exhilaration - you're open to the world - more open to sharing, inviting reaction, inquiry, condolence. Headphones don't cut you off in the same way.
Perhaps audio books can have the same impact. I don't know.

You're right, Annie. Autotune's fine until you can tell it's Autotune, at which point it rather defeats the object, doesn't it? Rather like Botox in that respect.

A pleasure Rol. May do something about Wesley Willis later.

I think her bi-polar disorder may have some bearing on her decontextualisation, Chris, and it gives her a bit of moral leeway.

Loathing is often stronger than the other thing, Geoff.

Audio books, BWT: that's a very good point. Are they more like little radio plays? (Which can be quite emotional, but I've never switched one off for a reason other than boredom/exasperation.)

And I don't agree that the Shaggs are bad news for music lovers - they're bad for music quite-likers, who are the ones who buy the 95%.

They're bad news for music lovers if they encourage the likes of me to follow their example.

Music is overrated. 99% of the time I like silence.