Despite the assertions from the producers that American money would not have a detrimental effect on the new series of Torchwood, things aren’t looking so good. It’s not just the bit where the undead CIA bloke had to have Wales explained to him, or the tiresome pants/trousers badinage; it’s the feeling that they’ll be using the show as a dumping ground for Brat Pack stars whose careers started to falter in the 1980s. In fact, the whole show could be seen as something akin to one of the overflow camps into which the should-be-deceased beneficiaries/victims of the Miracle are being herded. 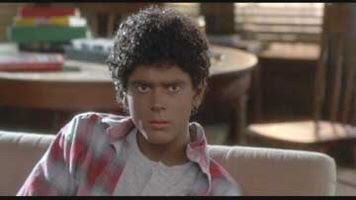 In the most recent instalment, we were blessed not only with Mare Winningham (St Elmo’s Fire) but also a barely recognisable C Thomas Howell (The Outsiders and the frightful Soul Man); this coming on top of the President from Independence Day, Dennis Nedry from Jurassic Park and Winston from Ghostbusters, the whole thing is a delight for devotees of the “hey-didn’t-you-used-to-be...?” tribe. But surely it’s a warning sign as to where Torchwood, and the whole Whovian universe is headed. Within a couple of series, I can see Jack Harkness (Emilio Estevez) crashing his dad’s car because he’s so angry that Amy Pond (Molly Ringwald) won’t go to the Gallifrey Prom with him, preferring as she does the smooth charms of The Master (Rob Lowe, in a cap-sleeved t-shirt). Co-starring Ralph Macchio as Davros and Demi Moore as The Rani, with the theme tune arranged by Wang Chung.

Actually, it all sounds rather marvellous.
Posted by Tim Footman at 11:15 am

Email ThisBlogThis!Share to TwitterShare to FacebookShare to Pinterest
Labels: Dr Who, film, TV

I have no idea what you are talking about.

I was going to tune in but decided to give it a miss after hearing nothing but bad reports, even from normally very loyal fans. Your entry further convinces me I made the right decision.

Neither have I, Dave. Just nod and smile, the nurse will be along for me soon enough.

I see your Ralph Macchio, Annie, and raise you Mary Stuart Masterson.

It’s such a pity, TH, because Children of Earth, the last Torchwood series, was in my opinion one of the best things ever to come out of the whole Dr Who universe (and I’m including the Tom Baker era at its peak).