And they had the best uniforms 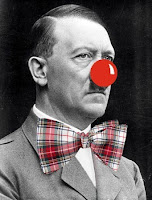 I remarked a few weeks ago on the fact that to many people in Asia, Hitler is simply another figure from history, with little of the bogeyman baggage that he brings in the West; he’s just one more Dead White Male, neither better nor worse than Churchill or Shakespeare or George Washington. Many Indians, it appears, would see nothing odd about the notion of a Bollywood movie called Dear Friend Hitler, dealing with the pragmatic alliance between the Nazis and the controversial Indian nationalist Subhas Chandra Bose, although the actor who was meant to play the Führer seems to have woken up to the fact that there’s something a bit iffy about the whole notion. But Mein Kampf has been selling well in India for years; and when a Mumbai scholar says something along the lines of

I didn’t find the book inspiring at all. It was interesting to read how he coped with his days of struggle, but his ideology of racial purity smacked of racism.

we want him to be more angry, more disgusted. Simple disapproval falls short. I bet Hitler would be mightily miffed to learn that his life’s work only smacked of racism.

But is it possible to be too angry about the Nazis? Forget the bloody football for a moment, and a hundred headlines dredged from the Stan Boardman songbook. Consider instead the people complaining about River Island selling a badge that resembles the Iron Cross; so full of loathing for fascist iconography that they forget that the decoration was first awarded in 1813, when Prussia was engaged in the Napoleonic Wars, when they were on our side. Which surely makes them the good guys, doesn’t it?
Posted by Tim F at 10:37 am

It's certainly impossible to be too angry with Stan Boardman.

Personally, I'm going to carry on being angry about Nazis.

Working with the Nazis was all the rage - my enemy's enemy etc. Everyone was at it - otherwise anti-fascist IRA men, English royals, Boers, the Soviet Union, anyone occupied by the Soviet Union.
Though if I were Indian, or more specifically Hindu, I might be peeved at the hijacking of the swastika.
Funnily enough - yes, I'm still banging on - I remember Swastika Laundries in Dunmurry just outside Belfast. The name was painted in big letters up the chimney.

Indeed, Rog. He was put on this earth to make Bernard Manning look good.

OK, GSE, is it possible to get too angry about superficial iconography that was co-opted by the Nazis, which in turn obscures the evil of their ideology and behaviour...

Which leads neatly on to the swastika, as BWT so sagely points out. Didn't Günter Grass or Heinrich Böll or someone of that ilk write about visiting Ireland in the 50s and being confronted with a swastika-daubed laundry van?

Boll apparently. And perhaps Im remembering wrongly and thinking of a chimney in Dublin? If I bump into anyone who frequetns Dunmurry I'll check.