This is not a crime

Some rapscallions have swiped Magritte’s Olympia from the museum based in the artist’s former home in a Brussels suburb. Painted in the 1940s, it’s not one of his better known works; I touched on this relatively undocumented period a few months ago.

In fact, because of its obscurity, most media outlets have had trouble tracking down an image of the half-inched canvas. The Times showed some initiative and came up with this: 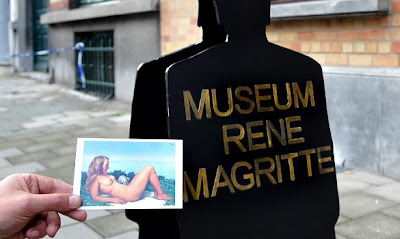 I’d like to think the robbers were suitably attired, in high collars and bowler hats.
Posted by Tim F at 10:35 pm

"What's behind your paintings?"