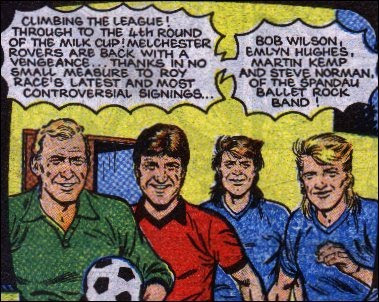 I’ve been enjoying the old comics that the Guardian and Observer have been giving away over the past few days. I’m guessing that, apart from the sales boost that freebies often give to a publication, the project is intended to remind us of the days when buying a comic, made of paper, in a shop was a transaction to be anticipated and then savoured; and that this Proustian tingle can be transferred to our relationship with the dead-tree version of the newspapers.

The funny thing is, the comics, despite having originally been published in the 1970s and 80s, display a level of interactivity that puts many websites to shame. Sadly the edition of Roy of the Rovers is from December, 1981, by which stage the regular ‘You Are The Star’ feature (a point-of-view depiction of a football match, with gaps in the commentary so the reader could insert his own name) had been retired. Each comic strip has a little box in which the reader is encouraged to give it marks out of 10, although whether this information was intended to be communicated to the IPC is not clear. However, much of the content is if not user-generated, user-prompted: for example, ‘Famous Football Funnies’ in which the likes of A. Seaman, Northampton, see their soccer-related quips turned into cartoons; and ‘Blackie Gray’s Talk-In’, in which readers ask the eponymous caretaker player-manager of Melchester Rovers about points of fact and opinion relating to the wonderful world of footie.

It’s Blackie, rather than Roy himself, who fronts the forum because the Melchester legend is in a coma, having been shot by a mystery assailant. A double-page spread is given over to get-well messages from football legends such as Alf Ramsey (who would take the reins of the Rovers until Roy recovered), Trevor Francis, Malcolm Macdonald (both of whom had played alongside Roy in the England team) and, er, Radio One DJ Mike Read. This delicious blurring of fact and fiction would reach its apotheosis in the mid-80s, when Roy was forced to trawl the ranks of fading New Romantic outfits to fill the Melchester roster (see above).
Even more metafictional is the Beano, from November, 1980. This was the 2000th edition of the venerable comic, and many pages are devoted not just to the history of the publication (reminders of such retired stars as Eggo the Ostrich, General Jumbo and Nobby the Enchanted Bobby), but around the commemorative product itself. Almost every story revolves around the eagerness of the central character (Roger the Dodger, Minnie the Minx, Billy Whizz and so on) to get their hands on the comic; but since the resulting escapades and mishaps are described therein, there’s a level of paradox that seems calculated to fry the minds of pre-pubescent readers. It makes the cross-media weirdness that befalls Hiro Nakamura (in Heroes) seem positively mundane.
The giveaway is scheduled to run until Friday, but there’s potential to extend it for weeks – I’d love to see Monster Fun and early Smash Hits tucked away between Toynbee and the crossword. And why stop at comics? Why not old copies of the Guardian itself. Or, since the examples chosen seem chosen for their self-referentiality and postmodern brownie points, why can’t a copy of the Guardian be packaged with a simulacrum of itself?
(And for more conceptually elegant japery, read this, by the wonderful ¡Oye Billy!)

Did Kemp and Norman really turn out for Melchester?

So Billy The Fish was based on fact?

They should give away one of the early samizdat editions of Viz (when it used to be funny).

Give me Sid the Sexist over George (I'm never wrong about anything, ever) Monbiot any day,

I'm pretty sure Dave Mustaine played for Melchester in the late eighties. If memory serves, after a run of poor form he was exchanged in a swap deal with Blackburn for Lars Ulrich.

Very much so, Geoff. For Kemp and Norman "of the Spandau Ballet rock band" (???) read Shakin' Stevens and "Mick Hucknall out of Simply Red".

Garfer, I reckon that even with issue 1, there were people saying it's not as funny as it used to be. I liked the Pathetic Sharks best.

MG: Was it Blackburn? Ot Tynefield City? Or even Tottenford Rovers?

Have to say I found Tommy the Tomboy in the Bunty summer special hard to take. So far it's stashed away from where small girls can find, to keep them safe from lines like: "I like an old-fashioned girl who needs masculine protection."
But... on the other hand, I suppose Sally Stevens Emergency 666, young entrepreneur and general go-getter isn't so bad. Boring but not so bad.
(Sigh) garfer is right. Life's so much simpler these days with the Fat Slags & Roger Melly.