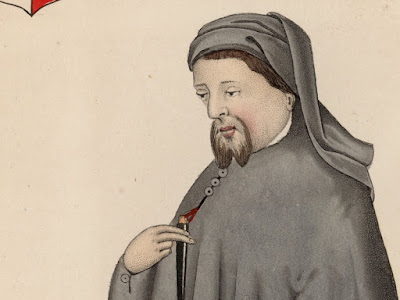 If the bloody Culture Wars do exist, it’s one of those conflicts where I wish both sides could lose.

Anyway, Leicester University, we are informed by, uh, the Daily Mail, has removed Chaucer from the English curriculum as part of a process of decolonising the curriculum. The Mail’s argument that this is a heinous outrage against Western civilisation might carry more weight if old Geoffrey’s works made regular appearances in its pages; if coverage of scholarly works about the Canterbury Tales or Troilus and Criseyde occasionally replaced the antics of Kim Kardashian or Cardi B or Amanda Holden. Funnily enough they don’t – except when they’re prompted to do so by the spectre of wokeness. (If they weren’t desperate to squeeze every ounce of ideological outrage of the Leicester story, would this piece by Ian Mortimer ever have been commissioned? Incidentally, I once got rather drunk with Dr Mortimer in a pub in – I think – Topsham, but that’s a tale for another day.)

In any case, this is nothing new. I studied English at undergraduate level in the late 1980s and even then, poor old Chaucer had been shoved out into the “optional extras” pile – alongside what the Mail still calls (in 2021) “such modish topics as race relations and feminism”.

And inevitably it turns out that, when the Mail can actually be bothered to talk to someone from Leicester, Chaucer’s removal from the syllabus is less a case of ideological cancellation, more about offering “courses that match our students’ own interests and enthusiasms, as reflected in their own choices and feedback that we have been hearing”. In other words, responding to the same market forces to which the Mail slavishly adheres and to which it demands fealty from everyone else. Unless there’s another reason for the Kardashian stories.

The Covid 'crisis' has been used to, among other things, kill off anything that resembles culture. We are required to be content with Netflix and UberEats.