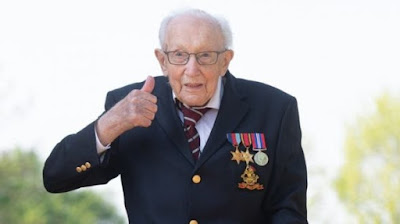 Captain (now Colonel) Tom Moore, who has raised over £30 million for NHS charities is inevitably going to become a contested symbol of the current epidemic. At the moment (it’s his 100th birthday today) he’s all but untouchable, but, splendid as his achievement is, more cynical souls know that things like this don’t just happen without some serious behind-the-scenes lifting from PR and marketing people. But nobody wants to point this out right now, for fear that his (doubtless quite accurate) image as an ordinary old soldier just trying to help out will be damaged.

In an odd way he has much in common with Harry Leslie Smith, the crotchety Corbyn fan who devoted his last years to railing against the evils of austerity and supporting the NHS. But of course Captain Tom has been embraced by mainstream media in a way Harry never could – because that prickliness, of course, was just as much Harry’s brand, and he was just as much a PR confection as Tom.

In Situationist terms, Tom represents a recuperation of the Harry brand, the plucky old soldier who still wants to do his bit – but this time, doesn’t want to ask too many awkward questions.
Posted by Tim F at 8:37 pm

There was genuine support and admiration, which the "PR and marketing people" and their followers latched onto. I haven't paid much attention, but I doubt if he ever used the title "Captain" himself since he left the army.