About Miffy and Tom

In class yesterday, we had a sort of cultural studies show-and-tell, where we each brought in an object and got a bit theoretical on its arse. My piece was a Chinese pencil case that I picked up in Bangkok in 2001. The main design revolves around iterations of Miffy (aka Nijntje), the rabbit character created by the late Dick Bruna in 1955 and (to his chagrin) something of an inspiration to the Japanese Hello Kitty. 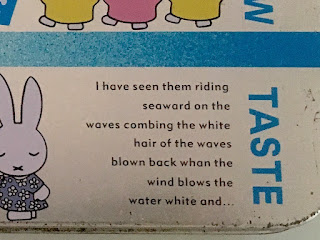 But what’s special about this slab of turn-of-the-millennium cross-cultural kitsch is the slab of text on the right; some very slightly mis-spelled lines from the last section of TS Eliot’s The Love Song of J Alfred Prufrock. Now, I have no idea why these two elements were juxtaposed. I’d guess that whoever designed the piece wasn’t a devoted fan of Modernist poetry; it was just a chunk of the English language and could just as well have been the Shipping Forecast or a recipe for pesto. Serendipitously, though, it tied in with one of the readings we’d been assigned for the class, Andreas Huyssen’s plea for students of culture to get beyond notions of “high” and “low” art and become aware of more significant distinctions (geographical, political, economic, etc). Here were two manifestations of culture, which most people in the room (and reading this) would define as “high” (Eliot) and “low” (or, less pejoratively, “mass” – Miffy); but to the anonymous individual who actually created the thing, there was probably no such distinction. 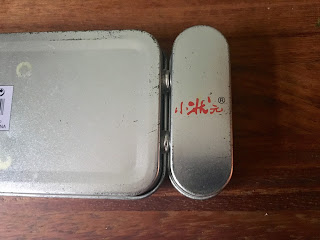 So, in one piece, high meets low and east meets west. But it gets better. One of my classmates turned the case over and pointed to a few Chinese characters, explaining that they were a reference to the scholars who passed the rigorous civil service exams in imperial times, the only way for poor, unconnected people to make any kind of social advance. So, in addition to high/low and east/west we had ancient/modern. And crucially, in these death-of-the-author days, all of these connections/collisions were pretty much accidental.