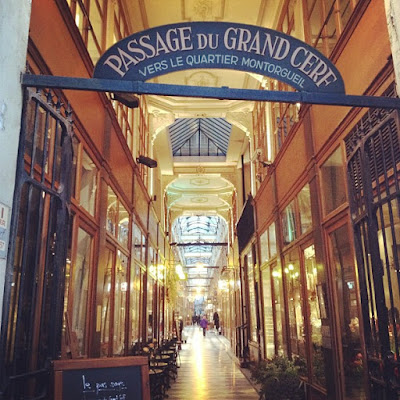 More classroom antics. We’ve been nosing around the lower reaches of Walter Benjamin’s Arcades Project, a massive, unfinished tome that’s superficially about Paris in the 19th century but manages to pull in Marxism, surrealism, postmodernism, flânerie and more; I’m tracing lines from here to Borges, Perec and more. It’s delightful and frustrating in equal parts that what we have left is a vast selection of fragments, but it does occasionally give a hint of the average writer’s working method. For example:


Play on words with “-rama” (on the model of “diorama”) in Balzac at the beginning of Pere Goriot.

which is essentially a placeholder, a comedian’s [INSERT JOKE HERE]. Another particularly appealed to me with my restaurant reviewer’s hat on, although this is one I’m almost glad he didn’t finish:


There is, to speak once more of restaurants, a nearly infallible criterion for determining their rank. This is not, as one might readily assume, their price range. We find this unexpected criterion in the color of the sound that greets us when [broken off]