The information superhighway: do you remember the first time?


I’m reading – do forgive me – Volume 4 of Philip Sandifer’s Tardis Eruditorum (Tom Baker and the Hinchcliffe Years) and this pops out:

...the charmingly dated phrase “information superhighway.” This phrase rightly serves as a sort of memetic tombstone for a particular historical moment in digital technology: the last point where it was possible to talk about it without actually knowing a single thing about it.

It’s about a novel by Justin Richards called System Shock, published in the years when Doctor Who wasn’t really a thing for most people, but that’s not particularly relevant and I haven’t read it anyway. But it did get me thinking about the way in which the web sort of oozed up on people throughout the 1990s. I’d had a bit of a conceptual head start over many of my contemporaries because the company I worked for at the beginning of the decade marketed a vast database that clients were able to access remotely from proprietary terminals (which were forever breaking down and always reminded me of Etch-a-Sketches). Towards the end of my time there we installed an intranet and I’m pretty sure that the first e-mail I ever sent was directed to one of my colleagues with whom I’d just endured a rather messy break-up.

But the first time I ever properly used the world wide web must have come in about 1995 – coincidentally the same year that System Shock was published. It was in an internet cafe (remember them?) somewhere in central London and you paid not just for your time online but also for the assistance of some bright young thing who’d tell you what to do while also bringing your coffee, a sort of browser barista. And the first thing I typed into a search engine, prompted by all the smut and innuendo that attended the protracted death rattle of the Major government, was: 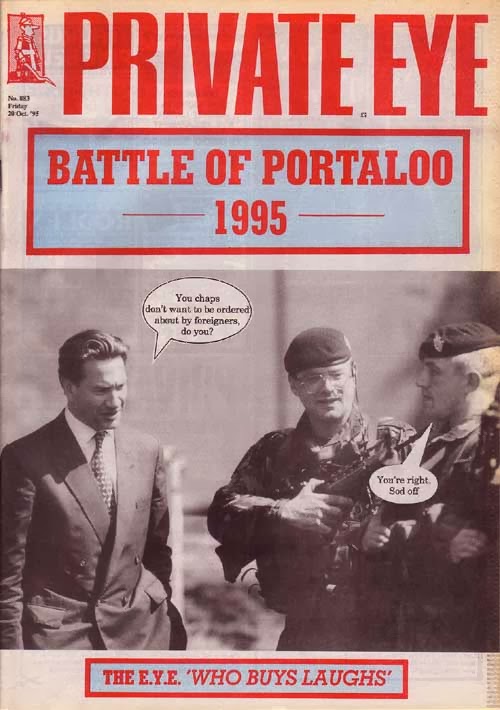 The problem is, I can’t for the life of me remember what answers came up.

Anyway, over to you, my dwindling band of heedless bots and casual passers-by. When you went on the www for the very first time, what did you do, where did you go, what did you ask?
Posted by Tim F at 7:25 am

I don't remember. I think I was in a library in Italy with my cousin - which would be 1999 or thereabouts. I do remember the connection was horribly, horribly slow, and we were in a completely empty library - hundreds of books for a tiny little market town on top of a hill in Basilicata (they're all on top of hills, the valleys used to be malarial).
Actually, I think I do remember, she was checking our flights hadn't been changed. I thought she was very anally retentive at the time, but it was a 2 hour drive to the airport, and 4 hours round trip for the people dropping us, so probably she was only being sensible.

It was at some point in 1995 and after a lot of faffing around, I managed to connect with CompuServe. I could only find channels at first, so I looked at the news.

One of the first things I did was buy a fruit cake from a monastery in America, just because I could.

It was 1998. I was just out of rehab hospital after my motorcycle accident, staying with two friends who were both ICU nurses that took care of me for a couple of weeks. I had time on my hands while they were at work, so I spent it on their computer. My first experience was doing an obsessive search on the fellow who ran up the back of my Triumph while racing two other cars. He fled the scene, but was nabbed by the police [thanks to witnesses] and charged with a felony hit and run. I did the search on Lycos [which I just discovered still exists].

Oh, and I became addicted to online backgammon as well.

Hi Victoria. I remember checking a flight from a New York phone booth. I'd better not mention that to a young person, I might get laughed at.

I have an image in my head of the kitchens in The Name of the Rose, Steerforth. Not good.