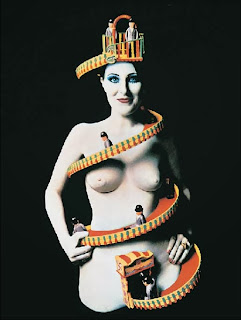 I can’t remember when I first heard or heard of the Beatles because where I lived, they were always around, always a presence. I’m not quite ancient enough to remember them being a living breathing, extant thing, a news story (stop-everything moments like ‘Hey Jude’ on the Frost show and ‘Get Back’ on the Apple roof happened during my lifetime but too early for me to remember) and yet the music has been there in the background for as long as I can remember. And the story, too, even if I sometimes got the details wrong. I remember poring through my dad’s copy of The Beatles Complete that was inside the hinged piano stool, simultaneously besotted and disturbed by the variously underclad ladies but above all obsessed with Alan Aldridge’s picture on the inside front cover that depicted the incremental transition from cheeky ‘Love Me Do’ moptops to bearded ‘Let It Be’ litigants. (I can’t for the life of me find the image online and the version that I remember is, as far as I know, tucked away in a bookcase somewhere in Hampshire after the piano gently wept itself to oblivion but if anyone has a scan please let me know.) And without knowing many of the details of their lives beyond the names and the music and a couple of viewings of the Yellow Submarine movie I invented a whole narrative for the foursome, much as I did for Doctor Who and my other imaginary friends. These were characters, puppets of my mind. Intellectually I knew that the dull farmer who sang ‘Mull of Kintyre’ was also the weird jester behind ‘The Fool on the Hill’ but it was as if – like the Doctor – he’d reincarnated, becoming something only tenuously connected with his previous persona. Wings was a foreshadowing of the Colin Baker years. And as for what John, George and Ringo were doing in the 1970s, I don’t think it ever crossed my pre-pubescent mind. They may as well have been dead.

And then one of them was. I was 12 years old when Lennon died and the acres of newsprint prompted by the event filled in a lot of the empirical gaps; this was the first time I’d heard of Brian Epstein and the Maharishi. Shortly afterwards I read Philip Norman’s Shout!, the first of many Fabs books I’d devour, and got to grips with the actual history, albeit one that turned out to be rather skewed: it set in place the orthodoxy of Lennon the angry saint and McCartney the prim sell-out, which persisted until Ian MacDonald’s Revolution in the Head more than a decade later. Macca referred to the Norman volume as Shite!. I also found myself on an educational cruise in the eastern Mediterranean where the evening’s entertainment pretty much consisted of alternating showings of the 1966 World Cup final and A Hard Day’s Night. I came home with a temporary aversion to Turkish delight and convinced that I’d been born 15 years too late.

And it was around that time that I started properly, actively to listen to the music. Previously it had been something going on, tapes of the Red and Blue albums soundtracking long family car journeys in the gaps between the Ella songbooks and the weather forecast. But now I was bold enough to raid the paternal vinyl collection, going back to the source, to Rubber Soul and Revolver and, of course, Sgt. Pepper. The one I left till last, because it looked at the same time forbidding and dull, was The Beatles, aka The White Album, recorded and released in 1968, the year of my birth. The critical consensus is that it’s potentially a superb single album, foolishly stretched over four sides by a combination of drugs, arrogance, jealousy and post-Epstein (he’d died the previous year) indiscipline. But it quickly became – and remains – my favourite of their LPs for the same reason that In Utero, The Holy Bible and This Is Hardcore would be among my favourite albums of the 1990s; I’m fascinated by things falling to bits and people recording the moment through their art, at once participants and observers.

Anyway, I kept listening and reading and life carried on, as it does. And I encountered people who didn’t much care for the Beatles, which seemed odd then but less so now; I still reckon it’s perverse to deny their cultural significance but if you don’t enjoy listening to the music itself it’s just a matter of aesthetic preference; who am I to judge? And I also found people for whom the Beatles were simply the best band ever, which felt even weirder and still does. Surely they were outside any ranking system of bests and favourites; that was for Captain Beefheart and James Brown and Joni Mitchell and Prince and the Raincoats, to be loved or hated and argued about at two in the morning over bottles of Bulgarian pinot? The Beatles were just sort of there, like the Bible and Shakespeare on that imaginary desert island.

But then it hit me – not entirely coincidentally, this was around the time that I first got interested in postmodernism and all that malarkey – that these differing perceptions of the Beatles were down the fact that there were not just different Beatles, there were different The Beatles. I described in my still-just-about-available Radiohead book how the release of Sgt Pepper on CD allowed listeners to re-sequence the album to create the track listing that the band originally conceived; the shift from ‘With a Little Help From My Friends’ to ‘Being For the Benefit of Mr Kite’ immediately sounds wrong, because it grates against decades of listening. And when I bought the CD of the White Album, my first move was to try to concoct the perfect single-album, 14-track version. But although the shift to digital permitted this level of bespoke album creation, it also led to a degree of uniformity, in that the distinctive sounds of individual slabs of vinyl, the pops and buzzes that made up the battle scars of an album’s life were erased, polished into a sheen of ones and zeroes, a product that simply played or didn’t play, with very little in between.

Which is why I’m fascinated by the work of Rutherford Chang, who owns over 900 different copies of the White Album, many of them seriously bruised. One of his recent projects involves recording 100 of these copies on top of each other, so the differences between them all are exposed and amplified, speeds shifting, accumulated scratches, fluff and grime making themselves known, each making a tiny impression on the overall work...

...and at that point the manuscript ends. I was going to attempt to tie all the threads together and bring it back to the current Doctor Who anniversary fandango, something about how everybody’s perspective on Who is dependent on the actor who was at the controls when they were seven years old and thus tonight’s episode is hundreds of layers of fluff and grime on top of each other but then I took a break to drink brandy and listen to David Quantick’s Blaggers Guide to DW and he pretty much did the Beatles/Who continuum thing (and he wrote a very droll book about the White Album, which I namechecked in my aforementioned Radiohead tome) so I won’t bother (although the Listen Again version inexplicably dies in the midst of a Zarbi bitchslap). Except to mention that the Fabs appeared in the Hartnell-era The Chase (introduced by Jimmy Savile, so officially it didn’t happen) and also, slightly tangentially, in the first story that I’m certain I saw, The Three Doctors...

The photo (and LP) that hooked me into The Beatles some time in 74/75 can be seen here:
http://i191.photobucket.com/albums/z316/BornTBW/Beatles_oldies-but-goldies.jpg

The record belonged to my older sister but I seized upon it and became obsessed by the band for a couple of years. The photo was key, though. To my 10/11 year-old self they just looked like the coolest people on earth. And they still do.

I almost agree with you about The White Album. For me it's joint-first with Revolver. Together they kind of represent the band's two faces.

Revolver is incredibly tight and focused. 14 inventive, polished songs in just over 32 minutes. The White Album, on the other hand, is wonderfully sprawling and idiosyncratic. Over 90 turbulent minutes of sketches, jokes and experiments with a good dollop of stone-cold classics thrown in for good measure.

I think it's the contrast between the two that (at least in part) makes them so fascinating. Would The White Album really be such a pleasure if it hadn't come from the band that gave us Revolver? The opposite applies.