I have written seven books, by which I mean there are seven books in circulation that have my name on the front as the sole author. But I’ve lost count of the number of books that have a little flake of me in their DNA, whether as an editor or a contributor or just someone who happened to be hovering in the background at the time, the Bill Crump of publishing. 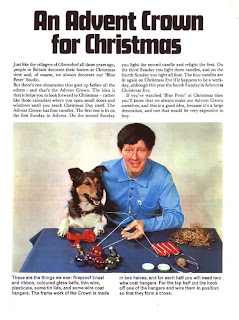 Anyway, there’s another one hitting the shelves right now and it’s called Christmas Dodos, by Steve Stack. I have a copy in my greasy mitts because the author (also known as Scott Pack) dropped me a line a few days ago to say he wanted to send it to me because of my contribution. Which was very decent of him, especially because I had absolutely no recollection of having contributed. Apparently Steve/Scott had put out a call over various social media for people’s reminiscences of Yuletides past and the ephemera associated with them and some were incorporated within the text but, to be honest, I belch out so much drivel over Twitter and Facebook these days, I have trouble remembering what I wrote a few hours back, let alone months ago. I assumed that when I actually got hold of the book I’d remember my own witty and perceptive contribution, but no. Apparently I said something about the Blue Peter Advent Crown with its coat hangers and flameproof tinsel. I suppose it’s the sort of thing I might have mentioned but any recall is lost to the digital ether, like the ghosts of Blue Peter pets past.

Which is appropriate, in its own way, because Christmas Dodos concerns itself with products and pastimes and concepts that are on the verge of extinction. Think board games on the back of selection boxes, satsumas, paper chains, shopping at Woolworth’s, the Christmas Radio Times and loads of other things that will prompt blank looks from anyone born in this millennium. Since I’m not deriving any benefit beyond the comp copy and the gentle ego-fondle that comes from one more product having my name buried within it, I can recommend the book with a degree of objectivity. It’s a slim, attractively priced volume that would make a very acceptable stocking filler or, come the New Year, addition to the reading matter in one’s smallest room (which I mean as a compliment). Which I suppose is appropriate, because I suspect that stocking fillers and toilet books are also on the verge of extinction. A bit like my memory.

PS: Christ, just spotted the typo in the header. Everything’s falling apart.
Posted by Tim F at 7:48 am

too funny. That's exactly what happened to me - i was like, I do NOT remember contributing to this, Scott, but evidently i did. Advent Crown superb btw. I actually really enjoyed the book - it made me go awww a surprising number of times

I wonder if anyone can remember contributing?

Hi, Emma. Yes, big awww factor. See, it can be done without the aid of Maconie or Peter Kay.

Dunno, Scott. Can you remember writing it? A book for which nobody will claim credit...

On that basis, I'll recommend the new Crap Towns book, which I've contributed to under several pseudonyms.

I had to buy my own copy.