Cornelius Gurlitt and the banality of availability 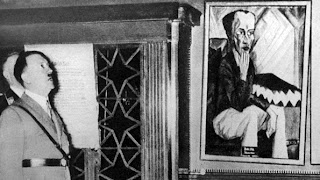 Most of the coverage of the art haul found in a Munich apartment focuses on the mechanics of how it all came together, the extent to which it was appropriated from its rightful owners and how Cornelius Gurlitt managed to sell bits of it off over the decades without alerting anyone to its existence. Which is all right and proper of course. This bleak period in German history is objectively more significant than a bunch of pretty pictures; and there’s a certain grim satisfaction of probing the cognitive dissonance of Nazis who railed against degenerate art but at the same time desired to possess it.

That said, assuming that some or all of the paintings do end up in public view, in galleries and museums, postcards and tea towels and fridge magnets, will their mysterious provenance affect our response to them? For a while now, I’ve been interested in the way some things – from the stolen paintings allegedly destroyed by Olga Dogaru to the World Trade Center – suddenly become more interesting when they cease to exist. Do others – the Gurlitt collection, for example, or the recently recovered episodes of Doctor Who – lose their charm because they cease to be myths and are now boringly accessible? 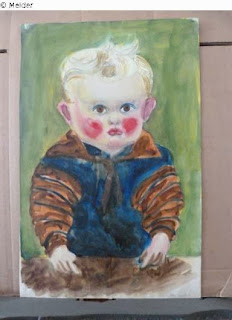 PS: The German government is being a bit less cagey about the pictures in the flat and has actually started releasing images. I do like this one, mainly because it looks remarkably like a baby photo of my dad.
Posted by Tim F at 2:49 pm

But weren't some of these paintings completely unknown before, because they disappeared so soon after they were created? They weren't mythical because hardly anyone was aware of their existence. It's like a time capsule has been opened.

I think this story is just amazing. I wish I could make a documentary about it. It's not just because of the art, but the ethics. He may not have wanted to possess the degenerate art, but he knew it was valuable. And he ended up saving it, when otherwise it might have been destroyed, the irony...

Some of them were unknown to the general public, or even to the art world in general; but it seems as if there’s a parallel universe of dodgy dealers (in all senses) who must have been aware of what Gurlett was sitting on. You're write, there's definitely a story in there.

What a very interesting question to ponder. Definitely the story of a painting bears influence on our response/the value. But should it?...