Every once in a while, it looks as if conventional politics is going to be turned on its head with the arrival of a clown who makes more sense than the straight actors. I suppose Boris Johnson and Nigel Farage are the closest we’ve got in Britain since the death of Screaming Lord Sutch, but in other countries they really go for it. Jesse Ventura and Al Franken have had their moments in the States; and right now Italy is apparently waiting on every utterance of Beppe Grillo. The problem is of course that we laugh and applaud when they point out how few clothes the emperor is wearing; but by the time said autocrat’s naked, bloodstained body has been tossed out of the window, we realise that jokes don’t get the bins collected.

It’s the election for the governorship of Bangkok today and conventional wisdom says its a two-horse race between the incumbent Democrat Sukhumbhand Paribatra and Pongsapat Pongcharoen of Pheu Thai, the party of the current Prime Minister. The capital has been solidly behind Sukhumbhand’s party in recent years but the man himself has disappointed many supporters; Pheu Thai is still associated by many with the deaths and conflagrations of the 2010 riots. In past clashes the left-field role has been filled by the shady massage-parlour kingpin Chuwit Kamolvisit but this time around we have the rather more amiable figure of stationery-magnate-cum-DJ Suharit Siamwalla who gets my (non-existent) vote if only for his constructivist-influenced posters and unashamedly hairy back. Which is superficial, but ultimately no more superficial than the tribal grudges that seem to motivate many supporters of the main parties and the politicians themselves (in Thailand, Britain and beyond). And his laugh is less annoying than Nigel Farage’s. 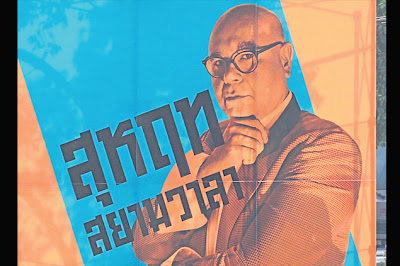 PS: Sukhumbhand won, which rather embarrassed some of the pollsters. My man Suharit came a highly creditable fourth out of 25 candidates. Analysis here.
Posted by Tim F at 6:01 am