Harlem Shake, makankosappo and the death of the dream

Well, it was fun while it lasted. That brief, glorious window when web culture was all about happy, random accidents and people having fun for the hell of it is officially over; although people will need to be conned into thinking they’re still free agents or the whole edifice will fall over, probably taking what remains of consumer capitalism with it. This article identifying the people who really benefited from the Harlem Shake phenomenon is a sobering read, not because I ever gave much of a damn about the meme itself but because of the whole end-of-innocence vibe it represents; the Altamont of Web 2.0, maybe. Of course, people will still do daft, innovative things and bung them up on YouTube; but by the time most of us see them, the pimps will have got to work. “The world is divided into two categories,” said the Dadaist Francis Picabia, “failures and unknowns.” Yup. 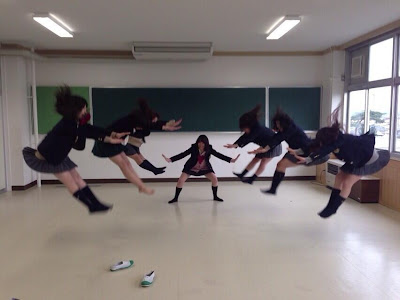 So there’s just time to say that I rather like this most recent daft meme, makankosappo, which basically involves Japanese schoolgirls pretending to have superhuman powers. But since its arrival mysteriously coincides with the imminent release of a new movie, maybe I’m already going off it.
Posted by Tim F at 12:05 pm

Your interesting post caused a round of googling; I'm still exponentially moving outwards. I have often wondered about some of these memes...

Regardless of the wider mememic issues that your post raises, I must say I immensely enjoyed the photos of superhuman Japanese girls. It did show me, though, how quickly the novelty of even real superpowers would wear off, as by the end I found the fascination with shockwave-based powers waning, and I wanted a little more ... perhaps some kind of electrical or wind-based powers ...

The problem is, Leah, by the time you've wondered them into submission, they've died off.

A posse of windy Japanese schoolgirls, Ed? The mind boggles.