Hate crime: when did you last punch a punk? 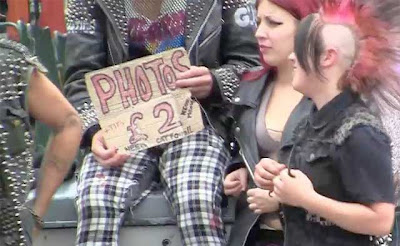 I’m in two minds about the news that the Greater Manchester Police is to record attacks on goths and punks as hate crimes. I can see the argument that some groups and individuals might feel themselves to be particularly at risk from harassment and assault but I’ve never bought into the notion that believers in a particular religion should have their sensibilities ringfenced unless such protection is also extended to people who are deeply committed to other cultural entities, such as the back catalogue of Fields of the Nephilim. And if we’re going to put members of certain youth cults in the same safe cocoon as lesbians and Muslims (Hey, there’s a party I want to crash!) then why not make some room for those whose lives revolve around Star Trek, let’s say, or Plymouth Argyle FC, or vintage lawnmowers, or UKIP?

We also have the problem of definition. Is it a hate crime if you bash someone because you think he’s a Muslim or a punk or a Trekkie but he turns out not to be? Never underestimate the sheer, all-consuming thickness of the committed bigot; remember that the first fatality of the post-9/11 anti-Muslim backlash was a Sikh. And if you do identify with the group on the list, how deep does your identification have to be? Are you a punk if you pogo at a wedding when the DJ plays ‘I Fought the Law’? I went through a purple nail varnish phase when I was about 19; is that gothic enough for the GMP? I’ve got a horrible feeling that the first time an assault is recorded under the new guidelines, the news will be greeted in some quarters with the sniffy response that the victim wasn’t the real thing.

If you're a fan of vintage lawnmowers, or a UKIP supporter, that might not be visible. I think this came about because people were being targeted purely because of their looks.

I seem to remember something about the definition of discrimination from Equalities & Diversity training in the misty long ago days when I was teaching - the definition relies on whether the 'victim' perceives they've been discriminated against.

I was once attacked in the street for being gay. I'm straight.

Was I hate crimed? I didn't report it. Should I have done?

Noticing teen punks on the south coast. Not as vulgar as the late '70s cohort - no spit, no snot - but chains/hair/boots.

They probably all live with M&D given the insane price of accomodation.