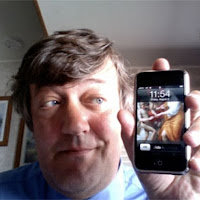 Stephen Fry, discussing his on/off infatuation with all things Twittery, reckons that “it is a bit much that somehow people almost feel they have a right to be heard in their insulting of me.” Well, assuming they have the right to say it, I suppose that entails the right for it/them to be heard. Otherwise, Twitter (and by extension, pretty much the whole of Web 2.0) develops into a whole new strain of the Bishop Berkeley conundrum: if Stephen Fry is insulted on Twitter and nobody reads the tweet, is he still entitled to be upset?

But on a more general point, we’re back to the situation in which people who have multiple pulpits, many of them well remunerated, from which to say stuff to a wide audience, slap down those for whom blogs, Twitter, Comment is Free and so on are the only means of being heard. Talking of which, our blogchum Fat Roland gets a mention in CiF, and some of the comments are a bit unpleasant, but I think he’s fine with that. Take note, Mr Fry.
Posted by Tim F at 12:26 pm

Fair and cogent points. But surely that means that it's OK to bitch about people behind their backs, but not to say it to their faces.

Moreover, because SF is *a celebrity*, what he says gets reported, whether he adds a @ to it or not. So when he slagged off Jan Moir, I'm sure she knew about it. Was he right to do that?

No, not necessarily ok, but different. And of course, somewhere in the 'behind their back' comments you have distinguish between criticism (which is not necessarily a Bad and Hurtful thing) and bitching - which I think is a line everyone gets to draw for themselves. Either way, anyone is entitled to an opinion of Stephen Fry that he doesn't know about, surely? If they want to have one, of course.

I would agree that Stephen Fry has more responsibility on his shoulders when he opens his mouth or tweets because of his status (with great power comes great responsibility etc etc). He has the right to be insulted, but he has to think a bit more carefully than you or I about how he responds. I don't think he handled that situation very well - but I suspect that, with hindsight, he would agree with that.

The Jan Moir thing's a slightly different kettle of fish. Her comments were published in a national newspaper with a wide audience, automatically opening them up to a lot of comment. Stephen Fry, I think, was entitled to think whatever he thought, and to respond in any pulpit he had access to, but I think he needs to take such action politely (because it's good manners) and responsibly (because of his status).
I cannot for the life of me remember what his comment was.

It was alright for him to insult all Daily Mail readers.

Well... hm.. I don't know. I'm a proponent of civility. I think that "@stephenfry has boring tweets" is a different thing than "@stephenfry is an ass," for example (or "an arse", if you prefer). I don't think it's that nervy to criticize; I think it's uncivil to publicly call someone names. I don't know which has happened here, though.

Hmm, and I didn't see the insult to Daily Mail readers because I left off following Mr. Fry at some point (just a bit too much traffic). So maybe I'm in no position to comment.

I also stopped following Mr Fry some time ago because for my non-techy mind, his tweets were like watching paint dry, then watching the dried paint dry even more.

Of course, I'd never say that on a public forum. Never.

(Thanks for the mention, fellow blogchum, although I'm pretty sure 'blogchum' should be contracted to 'blum'.)

(Have you thought about Disqus comment system or have you retired your geek boots?)

Is it Fry or the Twitter format that's dull? Fry's writing style isn't naturally suited to the merciless brevity of Twitter.

Also, perhaps Fry has confused his talent as a writer and Peter Ustinov-syle polymath with "Stephen Fry - the brand". The number of people who will read anything by Fry is limited.

The point about Fry on Twitter is that he's boring by his own standards. His tweets are no worse than anyone else's, but compared to the erudition and wit he displays as a chat show guest and columnist, they're a disppointment.

I have now started writing things on scraps of paper and pushing them through the letterboxes of random strangers.