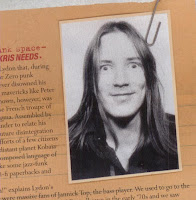 So it was Talking Musical Revolutions last night, transplanted to a pleasantly dank cellar in Shoreditch, and Stevie Chick is discussing his fine-sounding, just-out book about Black Flag with John Robb, and Stevie mentions that guitarist Greg Ginn was a huge Grateful Dead fan, and how the whole punk Year Zero concept is a bit of a myth, and that the Sex Pistols were really into Yes, and I mutter sotto voce that, actually, it was the Buzzcocks (specifically Steve Diggle) who were into Yes, and Billy completes my thought process by asserting that the Pistols (specifically John Lydon) were more into Van Der Graaf Generator, and I wonder whether we should start a Facebook group or something of that ilk for people to get all nerdy about the banal minutiae of the whole Now-Form-A-Band culture, although wouldn’t it be more punk not to care?
Posted by Tim F at 12:34 pm

John Lydon was never into any uncool artists. Oh, no.

And a fan of Kate Bush, he was raving about her on some programme recently. Though I bet he kept that quiet during the punk years.

He quite likes the Who as well, and the Queen Mum.

Here's track listing for the Tommy Vance show on Capital in 1977, on which JL unveiled his favourites. Including Gary Glitter, of course.

Of course Johnny was a prog rock fan. As some toff who worked at a record company sneeringly said "he was such a grammar school boy".

Oh, the subtleties of the British class system ...