It’s not as funny as it used to be 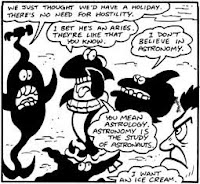 I’d rather drifted away from Viz, and only picked up November’s issue because it promised a nostalgic wallow in the company of some of my old favourites, such as the Pathetic Sharks, Roger Irrelevant and Johnny Fartpants. (Hey – what happened to Mr Logic – surely the model for Sheldon from The Big Bang Theory?) But there was one gem, in the sub-Tuckeresque midst of Roger’s Profanisaurus: a single word that encompasses all those regional exclamations that don’t mean anything, such as “Howay the lads” and “Och aye the noo”; bolloquialism.
Posted by Tim F at 2:12 pm

The Letters were always my favourite bit, especially when someone responded to "the letter above".

We have a bunch of old issues that we return to to read "Top Tips" every once in a while. And once in a while we pick up a new issue at the international newsstand. But you're right... it's not what it used to be. (Which I suppose is a funny comment on a deliberately juvenile rag primarily invested in bathroom humor...)

But oh, those Top Tips could be hilarious...

The letters were quite postmodern, Billy, although I suspect if you described them as such to the Viz guys, they'd chin you.

The problem with the Top Tips, Valerie, was that reality always has a habit of trumping fiction: http://heroofswitzerland.blogspot.com/search/label/Top%20Tips